Harty/Colgan combo off to winning start 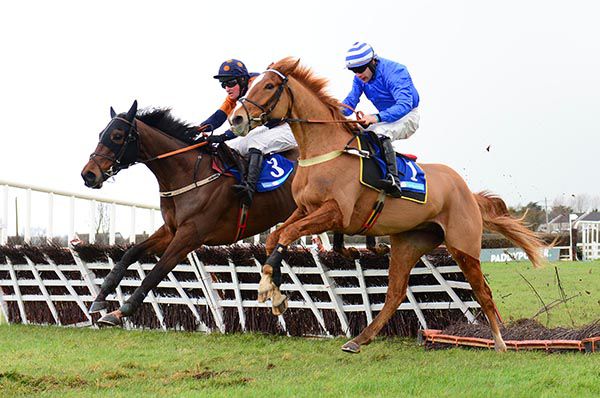 Robbie Colgan made his first ride for Eddie Harty a winning one when taking split two of the Cavan Developments Maiden Hurdle on Advantage Point (100/30 out to 5/1) at Naas.

For the sponsors, the McKiernans, All For Joy was all the rage in the betting, backed into 5/4 favourite from an opening show of 2/1.

He looked like he'd land the gamble when getting to the front on the run-in, after Advantage Point had knocked the last flat.

However Colgan got more from the victorious Germany gelding to eventually gain the day by a length.

A couple of Fame And Glory newcomers, Royal Thief and You Can Call Me Al performed well to fill the third and fourth spots.

“Even though he's six I still think he's a baby and he's one I'm looking forward to for the future.

“We'll probably have to step him up now. We'll do that for the rest of the year and see what it brings.

“He'll probably end up going chasing, that will be his game.

“When he's long (at his hurdles) he's brilliant but when he's short he's still unsure what to do so we'll work on that.

“He'll step up in distance when he has to. Robbie said he could have went a bit quicker even. If you can do that you'll pick up your share of prize-money in those graded races.

“Robbie said he had a blow between the last two and he'll come on from it.

“He had plenty of opportunity to throw in the towel if he wanted after missing the last but he didn't and he won well in the finish.

“I only wish Germany was still with us as he was some stallion. He's badly missed.

“Unfortunately Germany is not eligible for EBF so you can't go for any of those EBF handicaps or anything of those things.”