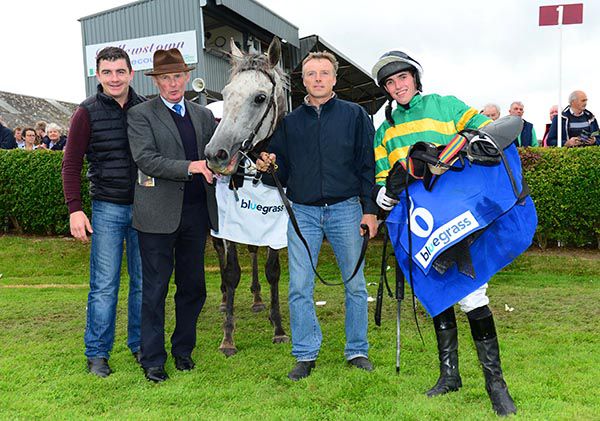 The Padraig Roche-trained Bay Hill gained the tenth win of his career when claiming the featured Mullacurry Cup at Bellewstown this evening.

The JP McManus-owned grey went to post the 9/4 favourite for the €20,000 contest and overcame some traffic problems to land the pot.

Darragh O'Keeffe found his mount short of room before the third last but he switched to the outer and produced him to press the leaders over the penultimate flight.

“He's a great little horse to have and he's after winning ten races now. I'm delighted with him,” said Roche.

“Horses like him are hard to come by and he wins every year. He's ran 40 times and has won 10.

“Darragh said he got a bit tight there and said he would have been an unlucky loser. Darragh is flying and is a free 5lb at the moment.

“I was keen enough to run him over fences but we'll see. We'll see how he is and there's a novice chase in Listowel but in some of those winners of one he can be a bit wrong at the weights.

“We'll keep him going anyway. He likes that good ground and as long as we get that we'll keep the show on the road.”