I'm An Izz Wizz bounces back to form 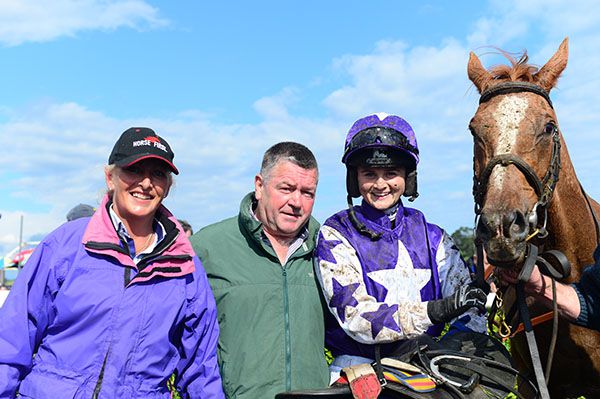 I'm An Izz Wizz recorded his first success since September of 2017, as he bounced back to form in the Eire Og GAC 50th Anniversary Handicap Chase.

The Liam Lennon trained eleven-year-old was a disappointing sixth behind Slemish over the course and distance on his last start in March, and was sent off a 7/1 chance this afternoon (backed from 10s).

Settled towards rear by Katie O'Farrell, the chestnut son of Desert King took closer order from four out and was sixth after jumping the next.

He came with his effort before the last and was ridden to lead inside the final 150 yards, keeping on well from there to score by four and a half lengths. Mr Bolt who was backed from 16s to 7s on-course, couldn't hold off the winner on the run-in, and had to settle for second under Noel McParlan for his father Sean. Allduckornodinner (5/1) was a length and a quarter back in third, while Shes Flat Tothemat (9/2 into 7/2 favouritism on-course) was a disappointing fifth.

The Stewards received a report from Mr. W. Fleming , Irish Horseracing Regulatory Board Clerk of the Scales, regarding the fact that Mr N. McParlan , rider of Mr Bolt , having declared an overweight of 2 lbs was attempting to weigh out at 3 lbs overweight. Evidence was heard from the rider concerned. Having considered the evidence, the Stewards were satisfied that Mr. N. McParlan was in breach of Rule195 (i). The Stewards fined Mr. N. MC Parlan E150 and allowed Mr. Bolt to run in accordance with Rule 198 (vii).