Impressive Godolphin newcomer gets Oxx off the mark 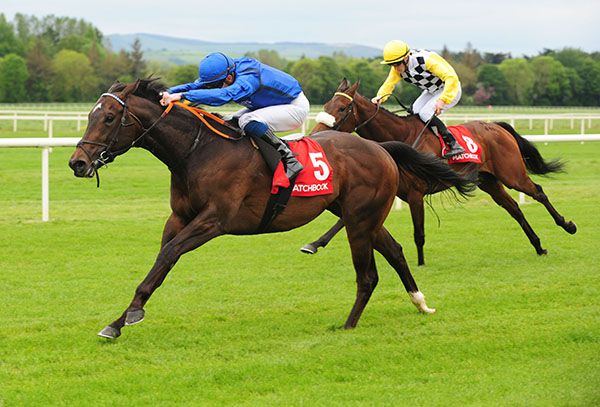 John Oxx sent out his first winner of the year at Cork today as his well backed newcomer Highland Dress made a taking winning debut in the Matchbook Straight Seven Maiden.

The Godolphin-owned son of Shamardal was supported from 7/1 this morning in to 4/1 at the off today and in the race his jockey Colm O'Donoghue enjoyed an armchair-like spin on the colt. The pair breezed into the lead with two furlongs to race, as the rider afforded a glance behind for dangers and O'Donoghue merely pushed out the colt inside the final furlong for a snug two and a quarter lengths win over Arabeska

An impressed Oxx later joked “he (O'Donoghue) had quite a few good looks and for a while he wasn't looking straight ahead. His head was at a right-angle and he must have been feeling comfortable but fortunately a bullock didn't stray out on the track!

“He was delighted with his temperament and said he behaved perfectly.

“I don't have too many (good prospects) but he might be one.”

He said “it is hard to know when they win maidens but he is a nice horse. We had him ready to run this time last year on Guineas weekend; he was precocious enough and a quick learner but then he got one little setback after another and here he is a year later!

“He had been working well and we thought if he did everything right on the day he'd be hard to beat in his maiden. He could have won that at six furlongs but around seven is his trip and going up in class we'll see.

“You'd love to go up (in class) bit by bit but very often the race isn't there for you.

“That is a lovely track for horses having their first run it is so level it is like a billiard table. It is great for green horses not to be meeting humps and hollows and ridges along the way.”