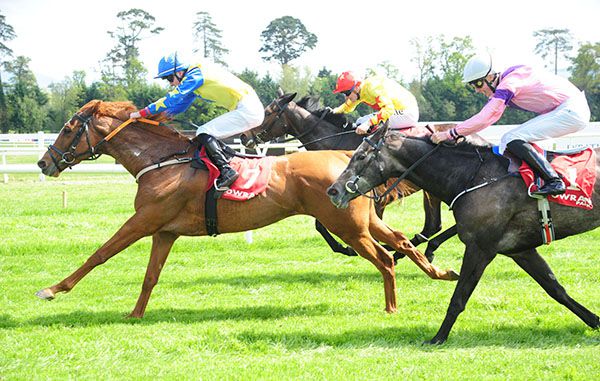 Annie Fior has been a revelation this season and and made it three from her last four when keeping on best in the fillies' handicap at Gowran Park.

The 7/2 joint favourite (from as big as 13/2 in the morning) has struck up a good partnership with 7lb-claimer Adam Farragher who was on board again today.

She was ridden into the lead over a furlong out and kept finding to close out the race by half a length from Wisdom Mind (10/1) and a neck to Crotchet (7/2jf) who both represented Joseph O'Brien.

“It was probably her biggest test yet and I thought the ground was a bit quicker than ideal but she just keeps finding and keeps finding,” trainer Brendan Murphy said.

“She has impressed us more and more with every run. She knows what she's doing now and knows how to get her head in front.

“She's entered for Wednesday, because she's been very settled at home recently, but judged on the way she ran there we might just skip that one and head on for Naas in a couple of weeks time for Listed company.

“Either way we'll have to start looking at Listed company for her after that performance.”

The Stewards interviewed S.M. Crosse, rider of Crotchet (GB), concerning his use of the whip in the latter stages of this race. Evidence was heard from the rider concerned. The rider gave his evidence in the presence of M. Crosse. Having viewed a recording of the race and considered the evidence the Stewards found the rider in breach of Reg.10.3(g)(frequency) and having taken his record into account suspended him for one race day.