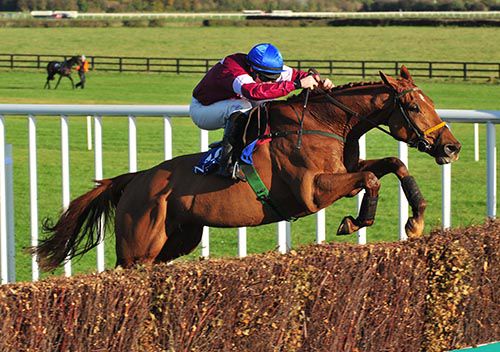 Noel Meade is eyeing compensation in the Irish Gold Cup for Road To Respect following his luckless run at Leopardstown on Friday.

After making a scintillating reappearance in the JNwine.com Champion Chase at Down Royal in November, the Gigginstown House Stud-owned eight-year-old was favourite to successfully defend his crown in the newly-named Savills Chase.

However, he stumbled badly on the run to the second fence from the finish, shuffling him back in the field before he stayed on in the straight to take third behind the impressive Kemboy.

Last season Road To Respect went straight from Christmas to the Cheltenham Gold Cup — in which he finished fourth — but this year he could first return to Leopardstown for the Irish Gold Cup on February 3.

Meade said: “There’s not a bother on him — he came out of the race bouncing.

“It was unfortunate what happened. He actually stumbled twice if you watch it back.

“It was good to see him finish the race well and he’s fine since, which is the main thing.

“I think he’ll go back to Leopardstown for the Irish Gold Cup.”