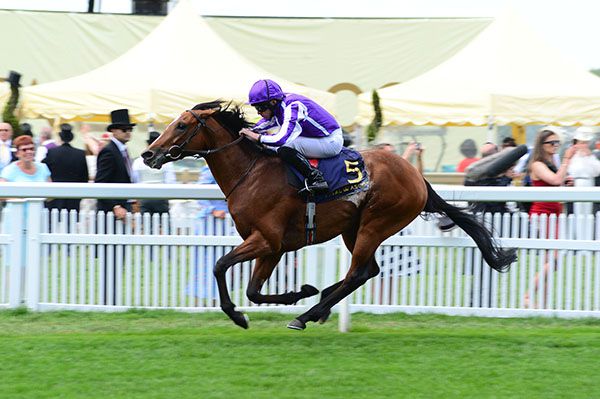 Aidan O’Brien’s Japan is out to confirm the huge impression he made at Royal Ascot in the Juddmonte Grand Prix de Paris at ParisLongchamp on Sunday evening.

Third in the Derby, the Galileo colt was one of the most impressive winners of the meeting in the King Edward VII Stakes, beating Bangkok by four and a half lengths.

O’Brien opted to keep his charge in three-year-old company for this Group One affair, rather than stepping into all-aged events.

He said: “Japan is good and everything seems fine since Ascot. We were happy with him at Ascot. His run in the Derby before that was good. He made good progress from York to Epsom and then we felt he made progress from Epsom to Ascot.

“He had a little bit of a setback in the spring and that is why he just barely made the run at York. We had to wait and see how he was after York and that is why we felt he was just about ready to run in the Derby. He ran a very nice race there.

O’Brien also runs Western Australia and added: “He is a straightforward and honest horse. He is going back in trip and we think that might suit him.”

Charlie Appleby runs Jalmoud, who bounced back from a disappointing Ascot effort to be second to Headman in the Prix Eugene Adam.

Appleby said: “We are going back up to a mile and a half. I was pleased with his last start getting him back on track.

“At Ascot he was far too free and stepping up to that mile and six, he just didn’t see it out. He was never going to see it out the way he ran.

“He dropped back to the mile and a quarter and we let him pop away on the front end, and he was beaten by a better horse on the day.

“James (Doyle) said he rides like a mile-and-a-half horse, this opportunity is there and he has track experience, so we thought we would take our chance. We have also popped the hood back on this time.

“It was unusual for him to be as keen as he was at Ascot as the race prior to that at Longchamp, when he won on slow ground, they crawled round and he switched off.

“Thankfully we are back on track after that last run and we are looking forward to Sunday.”

Andre Fabre’s Roman Candle also sports the Godolphin silks and he is one of three for the trainer along with the Khalid Abdullah-owned In Favour, who represents the race sponsor, and French Derby disappointment Slalom.

Hughie Morrison’s Marmelo is the sole British runner in the Prix Maurice de Nieuil over a mile and three-quarters, while Richard Hannon’s Star Terms goes over for the Prix de Thiberville.

Hannon said: “She has a good chance. She has got Group One form as a two-year-old, she has not produced that yet so far this year, but she has bumped into some decent animals.

“She has run some very good races and it would be lovely for her to get her head in front. I think they will have her to beat and she certainly deserves one at that Listed level. The trip will be no problem.”

He said: “Saqqara King broke his maiden at Newmarket, he is by American Pharoah and he has done well since. His work has been pleasing.

“He will be joined by Well Of Wisdom, whose last start was in the Coventry. We are not making any excuses, he was probably just outclassed there. He has come out the race well enough and I think the step up to seven will see some improvement.

“Well Of Wisdom has that bit more experience there having had the three starts now, but Saqqara King looks like stepping up in trip in time will suit him. I feel he has got a nice progressive profile.”