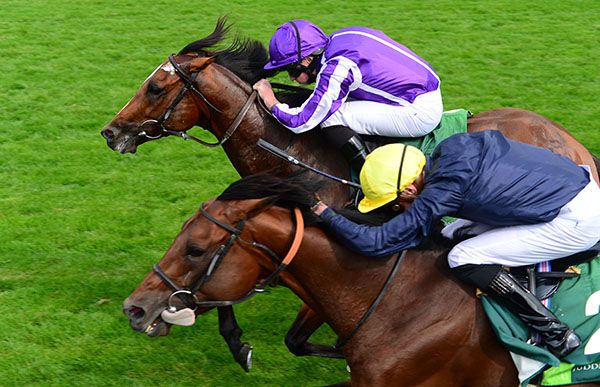 Japan edged out Crystal Ocean in a thrilling finish to the Juddmonte International Stakes at York.

The pair served up a terrific climax to the extended 10-furlong showpiece, with Ryan Moore on the Aidan O’Brien-trained Japan (5-1) just getting the better of James Doyle on Sir Michael Stoute’s Crystal Ocean.

Japan’s stablemate Circus Maximus set the pace with Crystal Ocean alongside him. Stoute’s admirable five-year-old hit the front a long way out, but could not get sufficiently clear of the opposition.

Although he knuckled down in typically game fashion, Crystal Ocean was caught by Japan in the dying strides and succumbed by a head to the Investec Derby third, who was giving O’Brien a record-equalling sixth win in the race, along with Stoute.

The supplemented Elarqam was a length away in third.

O’Brien said: “From the start he has been good and I couldn’t be happier.

“We didn’t want to overdo it earlier in the year as we were thinking of the autumn. We rushed him to the Dante and every run since then has been a step up — he’s stepping up all the way.

“Horses progress and you’re never sure which is the best. We don’t look at them like that home and let them progress from race to race.

“This horse would have no problem stepping back up in trip — he’s very comfortable at a mile and a half.”

Japan was cut to 5-1 from 8-1 for the Prix de l’Arc de Triomphe by Ladbrokes, and O’Brien said: “He’ll probably go to the Arc and might take in the Irish Champion on the way.”

Of the seventh-placed Circus Maximus, he added: “Donnacha (O’Brien) said go back to a strongly-run mile with him.”

Acknowledging another gallant performance from Crystal Ocean, whose season has also included victory in the Prince of Wales’s Stakes and a neck second to Enable in the King George, Stoute said: “Yes all of that, just didn’t win.”

Mark Johnston was pleased to see the faith shown in Elarqam rewarded, but left slightly wondering what might have been.

The Middleham trainer said: “He was obviously very keen early on and he got caught off the bridle a couple out, but he has come back with a vengeance.

“Jim (Crowley) felt had he let him stride on early on then he might’ve won it. Had they come up the middle, as they have done in every race for the last five years, he might have won anyway.

“So it’s frustrating, but it certainly confirms beyond any doubts that he had class, so that’s reassuring.”