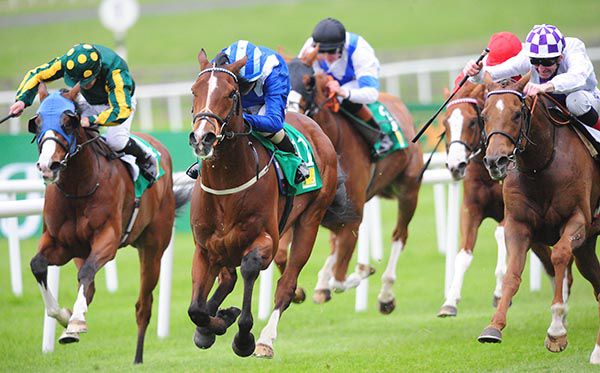 A long term Royal Ascot plan looks to be coming to fruition for Dermot Weld after Jassaar landed the valuable TRM Excellence In Equine Nutrition Handicap at the Curragh.

The 9/2 joint favourite was confidently ridden by Andrew Slattery leading well over a furlong out in this €100,000 seven-furlong Premier Handicap.

The Hamdan Al Maktoum home-bred son of Dansili needed to be kept up to his work in the closing stages to hold the late surge of top-weight Flight Risk by half a length, with the Michael Grassick-trained pair Texas Rock and Verhoyen in third and fourth.

Weld said, “I thought he would be tough to beat today, and he got a very good ride from Andrew Slattery. It might have been a wise choice to pick him because I think he’s great value for his 7lb claim.

"The plan which I’ve had in my mind for a long time for this horse is the Hunt Cup at Royal Ascot, if he gets into it — but I think he will now. He handles fast ground.

"He won well in Limerick the last day but he’s a fast-ground horse, and that’s usually what you get in the Hunt Cup.

"We know it’s a competitive handicap but that’s what he is and we’ll have a crack at it. I know it was seven furlongs today but I think a mile, or seven to a mile, is his trip.”