John Berry junior off the mark on Shack 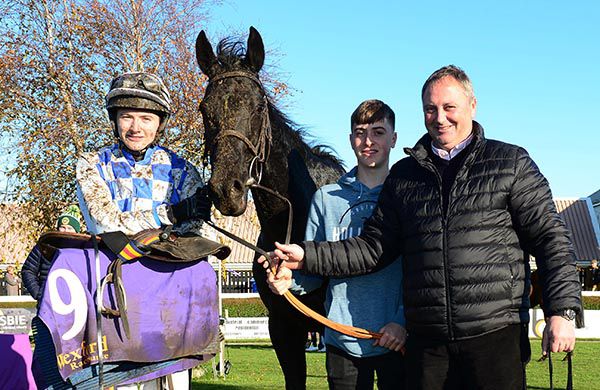 It was a red letter day for John Berry junior at Wexford this afternoon as he partnered his first winner aboard Caddy Shack trained by his father.

John Berry senior, a former champion in point-to-points, provided his son with a breakthrough success in the Casey Concrete Gorey Handicap Hurdle.

The Arcadio mare was produced to lead over the second last by the 7lb claimer and went on before the final flight.

She stormed away on the run-in to record an eight length success in the three-mile contest.

“We originally thought she wanted soft ground but over the summer her form came alive on good ground so we a bit worried today on that ground whether she's stay out the trip.

“Her mother was a good stayer and she seems to have picked up that attribute as well.

“I don't remember much of my dad riding, I'm too young but there are plenty of trophies in the house.

“I actually wear his racing boots so I'm literally filling his boots, although I have a long way to go before I can do that.

“He's given me an awful lot of opportunities and I think today was my 89th ride so I've had plenty of experience over the last few seasons and it's great to finally get my head in front.

“I'm in my final year of college, studying international business in Maynooth.”