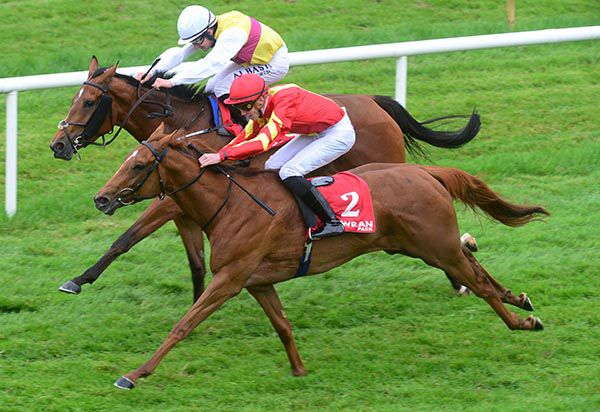 Altair (near side) and Fancy Feat
© Photo Healy Racing

Altair stormed home to win on debut at Dundalk and having missed the break on her second outing at Navan in April, today again displayed signs of greeness when beating runner-up Fancy Feat

Altair, a daughter of Australia, went in pursuit of leader Fancy Feat with over a furlong to race and while Fancy Feat stuck to her task gamely, Altair edged left in the final furlong but still managed to quicken lead close home and score by a neck.

Afterwards O'Brien said “she's a lovely filly. She was still very green today and was on and off the bridle and ran around a bit in the straight. Donnacha (O'Brien) said at Navan the last day that she was exceptionally green.

“She'll probably go up in trip now; she's in the Ribblesdale and I wouldn't be against thinking about going there. She's a nice filly and we think she will stay further. We think plenty of her.”