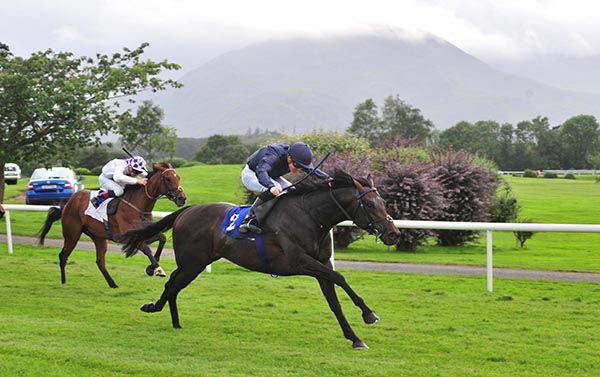 Joseph O’Brien sent out the first and second in the G.M.H.D. Apprentice Handicap at Killarney as the Shane Crosse-ridden Royal Aide (2s out to 5/2 favourite) triumphed convincingly.

Stable companion Severus Alexander did best of the rest in the mile and three heat, but Royal Aide easily brushed him aside by three and three parts of a length.

"He ran ok the last day when he met a good bit of traffic and he won nicely today and handled the bit of juice in the ground," said O'Brien.

"He is progressive, is a well bred horse but took a while to mature. I'd imagine we'll step him up in trip and see what happens.

"He is in at Bellewstown on Wednesday and I'd say there is a fair chance he'll run."

The Stewards received a report from the Clerk of the Scales, Mr. P. L. Malone, that P.A. Harnett, rider of Rockview Roman was unable to weigh out at the correct weight. Evidence was heard from the rider concerned who stated that his minimum allowed riding weight was 8st but the best weight he could do today was 8st 1lb. Having considered the evidence, the Stewards authorised P. A. Harnett to carry 1lb overweight and took no further action.

T.P. Madden, rider of Donnersnstrings trained by Mrs John Harrington, reported to the Clerk of Scales that his mount was checked over a furlong and a half out.