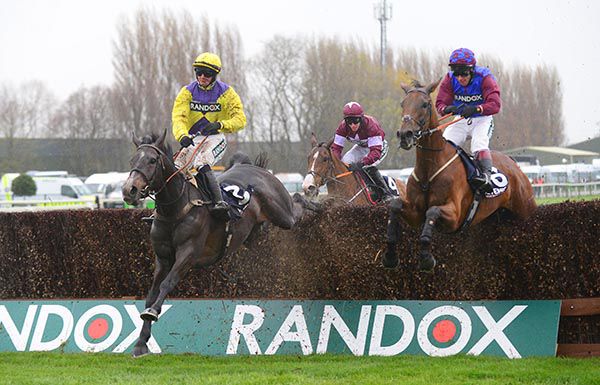 Kalashnikov presented trainer Amy Murphy with a first Grade One success in the Devenish Manifesto Novices’ Chase at Aintree.

A top-quality field lined up for the opening race of the Grand National meeting — with Warren Greatrex’s mare La Bague Au Roi sent off favourite to extend her unbeaten run over fences.

Having started the season favourite for the Arkle, the wheels fell off somewhat for Kalashnikov when he was beaten at Kempton and Sandown.

He then suffered misfortune at Cheltenham when Jack Quinlan was unseated after being badly hampered by a faller, and as a result he arrived on Mersyeside slightly under the radar.

Sent off at 4-1, Murphy’s charge was stepping up to two and a half miles for the first time and took over from La Bague Au Roi heading to the second-last.

With the race seemingly won, he then made a jolting mistake which gave the mare and Mengli Khan a second bite of the cherry, but Kalashnikov flew the last to maintain his advantage.

While the petrol gauge on the winner was beginning to flicker close to the line, he held off the mare to win by a length and a quarter to provide the trainer and jockey with the biggest victories of their careers.

Newmarket-based Murphy said: “Unbelievable. I’m hugely proud of our team. We only have 10 jumpers — to produce a horse like that, I’m delighted for them. It’s emotional.

“I couldn’t do it without them and what a ride from Jack. He rode him like he was the best horse in the race.”

She went on: “I promise you he is top class, as you’ve seen today. We’ve had a couple of things go wrong this season, but that was him at his very best.

“It’s a great way to finish off the season. It’s great to get my first Grade One winner for my father (owner Paul Murphy) and the whole team. I lost my shoes twice out there, but somehow they are still intact!

“Next season it will all be about the Ryanair. That’s his trip. Hopes and dreams.

“It was a good fact-finding mission.”

Quinlan said: “It’s my first Grade One. It’s unbelievable. I’m lost for words. It’s what we work for, but I never thought it would happen.

“All credit to Amy and the team at home and Mr Murphy for putting me on the horse. Jockeys like me don’t get opportunities like this every day. They have been good to me.

“We never lost faith in him. We knew he was good.”

Greatrex said of La Bague Au Roi: “Dicky (Richard Johnson) said she wasn’t quite what she has been all year. She still felt OK, but didn’t have that zip and was a bit flat, but she still stuck in.

“From four out you normally give her a squeeze and she is gone — she was just a bit laboured. What he loved was from two out to the last she was still trying to fight to get in there and he still thought he had a chance.

“She has won two Grade Ones this year and been second in another. She has had an amazing season. We will put her away now and regroup, but I’d say the first major target will be the King George and she will probably have a race before that. What that is, I don’t know.

“I’m disappointed, as you want to keep the run going, but I’m proud of her as she hasn’t gone down without a fight.”

Gordon Elliott said of third home Mengli Khan: “He ran well. He made a mistake at the third-last, which was just at the wrong time, but he ran a good race. He will go for the Ryanair now (at Fairyhouse).”