Keane and Heffernan Laughing in the rain at Galway 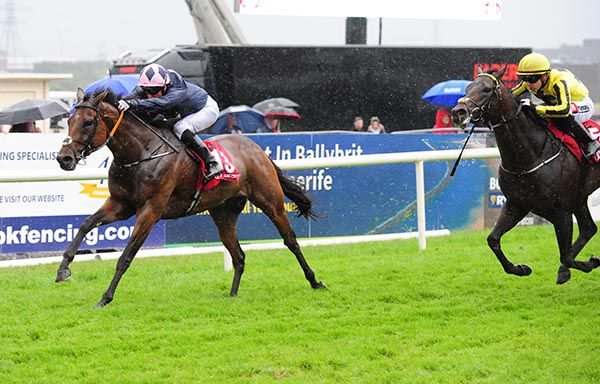 LAUGHIFUWANT and Seamie Heffernan (left) win the 'Ahonoora' Handicap from On A Session.
© Photo Healy Racing

Laughifuwant (20/1) relished the rain-softened ground at Galway to land the final day feature, the Irish Stallion Farms EBF ‘Ahonoora’ Handicap, in the hands of Seamie Heffernan.

It was a notable victory for Co.Meath handler Gerry Keane, whose son Colin was out of luck on the 3/1 favourite Saltonstall which finished eighth in his attempt to follow up his win in the big mile handicap on Tuesday evening.

The track was hit by some heavy showers on the final afternoon of the Festival, and the going description was changed to soft following this 7f feature.

Connections of the winner would have been delighted to see the rain coming, as the Roderic O’Connor gelding’s only previous win had been in a course and distance maiden run on soft ground last October.

His fast break from stall sixteen saw him in front after a furlong, and he had a healthy three length break on the field with a furlong to race.

He won by a diminishing three-quarters of a length margin from the fast-finishing On A Session (14/1), with the front pair nicely clear of the rest. Magnetic North (14/1) and Turnberry Isle (8/1) completed the frame in third and fourth places respectively, while Rufus King in ninth fared best of a five-strong British challenge.

The winning trainer Gerry Keane said: , “The ground is the key to him. He grows another leg on this ground, and won a maiden here on bottomless ground last year. The way he strides on that ground — he just loves it.

“We tried to sell him when he won his maiden. We had him as a breeze up horse and couldn’t get him into the sales.

“He’d get a mile but I’d say seven is probably his trip. We were going to run him in the Lincoln but didn’t have him ready in time.

“That’s my biggest winner in terms of prize-money. He’s owned by my wife Ester, and Fergus and Sandra Cumiskey. The Cumiskey’s bred him.”