Kemboy on course for Savills return 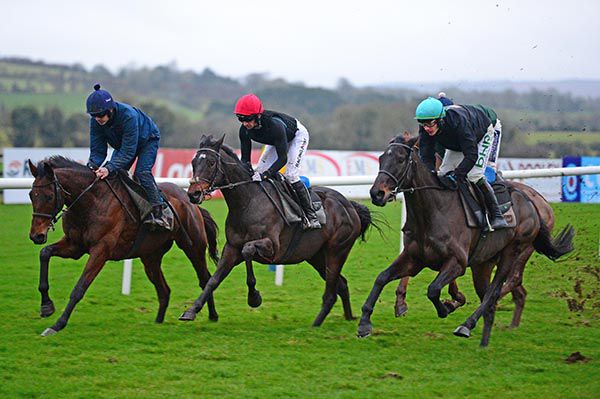 Stable companions Kemboy and Al Boum Photo are among 16 horses still in contention for the Savills Chase at Leopardstown on Saturday week.

Al Boum Photo provided Willie Mullins with an elusive first victory in the Magners Cheltenham Gold Cup in March, a race in which Kemboy made it no further than the first fence.

However, Kemboy — a dominant winner of last year’s Savills Chase — bounced back from his early exit at Prestbury Park with a brilliant display at Aintree before then seeing off Al Boum Photo in a Punchestown Gold Cup that will forever be remembered for Ruby Walsh’s swansong.

Kemboy appears the more likely of the two to turn up at Leopardstown and defend his crown, with Al Boum Photo having the option of bidding for back-to-back wins in the Savills Chase at Tramore on New Year’s Day.

The two big threats to the champion trainer’s team are Pat Kelly’s Presenting Percy and the Noel Meade-trained Road To Respect.

Presenting Percy made an encouraging start to his campaign when third in the John Durkan Memorial Punchestown Chase earlier this month, while Road To Respect — winner of this race two years ago and a luckless third last season — returns off the back of victory at Down Royal.

Delta Work looked a Gold Cup horse in the making as a novice last season, but was a disappointing fourth behind Road To Respect on his return to action at Down Royal.

Elliott said: “He worked at Naas on Wednesday morning, and the plan is to go for the Savills Chase.

“He’s better than he showed at Down Royal. He came home lame after it — we have him back sound now, and he’s working well, so we’re looking forward to running him.”

Anibale Fly was runner-up in the Gold Cup and fifth in the Grand National in the spring, but finished last of nine runners in the John Durkan on his reappearance.

“Anibale Fly will go for the Savills Chase at Leopardstown, all being well,” said Martin.

“Two and a half miles was a bit short for him in the John Durkan, but it was good to get him started.”

The Savills Chase is the second of two Grade Ones at Leopardstown on December 28, the first being the Frank Ward Memorial Hurdle.

Twelve horses have stood their ground for the three-mile contest — with a five-strong Mullins team including Bacardys, Penhill and star mare Benie Des Dieux.

Apple’s Jade has a bit to prove as she goes in search of a third straight win in the race, while Tom George’s The Worlds End and the Harry Fry-trained Unowhatimeanharry are potential challengers from Britain.

There are two more top-level prizes up for grabs on the fourth and final day of the Leopardstown Christmas Festival.

The feature event of the afternoon is the two-mile Matheson Hurdle, in which the Mullins-trained Klassical Dream will look to bounce back to winning ways, after finishing third behind stablemate Saldier in last month’s Morgiana at Punchestown.

He could be joined by stablemates Aramon and Sharjah, who won this race 12 months ago.

The latter earned a step up in class with an impressive return to action at Down Royal.

Elliott said: “Coeur Sublime will run. It was the plan to go straight to Leopardstown (after Down Royal).

“He’s in good form and worked well on Wednesday morning at Naas — we’re looking forward to running him.”

A strong Elliott team in the Neville Hotels Novice Chase is headed by Battleoverdoyen, while Mullins has confirmed Carefully Selected and the former brilliant hurdler Faugheen.