Kenny and McCourt Have A Nice Day in Limerick 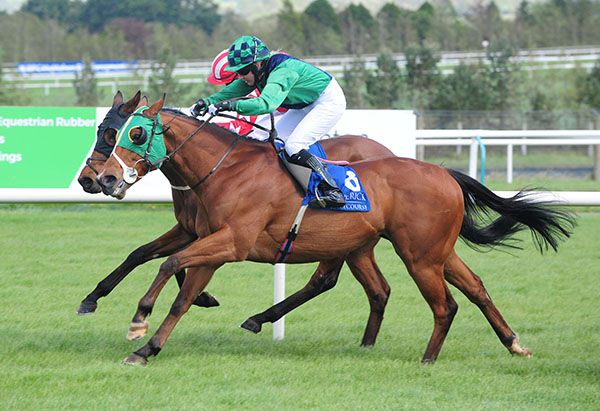 Have A Nice Day bounced back to form in the mile handicap at Limerick to grab his 12th career victory.

The nine-year-old gelding crept into contention over a quarter of a mile out under Karen Kenny.

He came with a sustained challenge between horse at the furlong pole and got up in the closing stages to beat Pepperoni Pete by a neck at 20/1.

A gamble was foiled on the runner-up, in first-time blinkers, who went to post at 6/1 having been 12/1 on opening show and 25/1 in the morning. Shifted Strategy kept on in third at 11/1 without reaching the front pair.

Trainer Tom McCourt said: "I have him two and a half months and he is a grand, hardy horse. We said we'd try Karen on him as sometimes those older horses go well for lesser-experienced riders.

"I was wondering this morning whether to run him but I went back through his form and he had a very good run at Galway last year on soft ground when he stayed on very well up the hill. He wouldn't want firm.

"Laurence (Dempsey, owner) is from the midlands but is away in England at a brother's birthday."

The Stewards enquired into the running and riding of Contrapposto, ridden by Adrian O'Shea, and trained by Mrs.A.M.O'Shea. Evidence was heard from the rider and trainer concerned. Adrian O'Shea, stated that his instructions were to jump off in rear, ride to get the trip and to do the best he could. He said his mount had shown plenty of ability in the past, but was a very poor mover when galloping. He added that his mount hung badly from early in the race and that he was unable to correct this despite his best efforts. He was satisfied that he had achieved his best possible placing, but felt he may have finished closer if his mount had not hung towards the rail in the closing stages.

Mrs.A.M.O'Shea confirmed the instructions given and expressed her satisfaction with the ride. She stated that her charge had plenty of problems in the past and felt the animal had hung today owing to unsuitable ground conditions. The Stewards also received a report from the Irish Horseracing Regulatory Board Veterinary Officer, who stated that Contrapposto was a poor mover and was found to be coughing post race. During the enquiry the trainer reported to the Stewards that Contrapposto was found to to have burst following endoscopic examination by the Racecourse Veterinary officer post race and this was confirmed by the I.H.R.B. Veterinary officer. Samples were taken for analysis.

Having viewed the recording of the race and considered the evidence and in light of the Veterinary report, the Stewards noted the explanations offered in relation to the running and riding of Contrapposto. Furthermore, the Stewards were of the opinion that Adrian O'Shea was in breach of Rule 213 in that he had failed to report anything which may have affected the running of his horse in a race. Having taken his previous record in this regard into account, the Stewards suspended Adrian O'Shea for two race days.