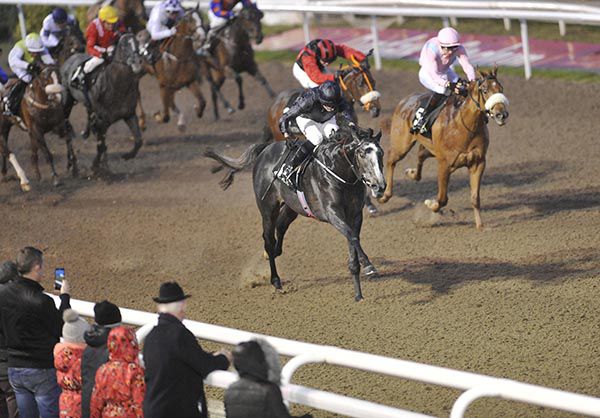 Chelmsford officials are thrilled to be welcoming Aidan O’Brien’s first ever runners at the track for the Woodford Reserve Cardinal Conditions Stakes.

Thursday’s inaugural £60,000 contest is the last of seven races in the ‘European Road To The Kentucky Derby’ — and offers the winner, provided they are nominated, 30 qualification points for the opening leg of the US Triple Crown, which takes place at Churchill Downs on Saturday May 4.

Two of the nine declared horses for the Chelmsford feature are in contention for the Kentucky Derby, most notably O’Brien’s exciting colt U S S Michigan — who made an impressive return to action on the all-weather at Dundalk last month.

Speaking at a press morning at his yard on Monday, O’Brien said: “If we were to have a horse for the Kentucky Derby, U S S Michigan would be the only one. He is a big, long-striding cruiser — and we always thought he would get a mile and further.”

U S S Michigan is one of two runners for O’Brien, along with Naas nursery winner Antilles.

Andy Waitt, clerk of the course, said: “We’re looking forward to it immensely.

“The Ballydoyle horses have arrived and are safely tucked up in their boxes. Joseph O’Brien has had runners here before, but these will be Aidan’s first runners — which is hugely exciting for everyone involved.

“We’re well-supported by Newmarket trainers and from further afield, but to have Aidan O’Brien’s horses here is a cherry on top of the cake.”

He added: “Mike Ziegler from Churchill Downs was looking for somewhere to hold the race. We offered to stage it here, and we’re delighted to have it.

“It would be amazing if a horse could win here and go on and win the Kentucky Derby.

“I saw U S S Michigan after he arrived — and I have to say he is a lovely looking horse.”

Along with U S S Michigan, the other runner in Thursday’s race to have been nominated for the Kentucky Derby is the Paul Cole-trained Shir Khan.

The youngster was a surprise but impressive winner on his most recent outing at Wolverhampton in November.

Oliver Cole, assistant to his father, said: “It is going to take a fair horse to win on Thursday, because it looks a hot race.

“Shir Khan has been working well. We have not done any testing work — but what we have seen, we have been pleased with.

“We don’t quite know how good he is and whether he is in the deep end or not, we don’t know. I expect we will find out on Thursday.”

If either U S S Michigan or Shir Khan finishes second, and the other does not win, then they will still get the guaranteed Kentucky Derby slot with 12 points — with this race offering more points than any other in ‘European Road To The Kentucky Derby’.

The highest-rated horse in the field is Mark Johnston’s Dark Vision, who looked every a smart prospect when winning the Vintage Stakes last August but returns with something to prove after disappointing in the Champagne Stakes at Doncaster behind Too Darn Hot.

Charlie Johnston, assistant to his father, said: “Obviously he was disappointing the last time we saw him run at Doncaster. He came back not quite right from that race, and we consequently pulled up stumps for the rest of the year.

“He’s been back in a while now, and seems in good form, so we need to run him and see whether he’s a Guineas horse or not. Hopefully he is.

“It was either come here or run in the Craven next week, and we felt this might be the easier option. We might have got that wrong, but we’ll see.

“He seems well at home, and this will tell us where to go.”

Fanaar is a major contender for William Haggas too, judged on his comeback victory in the Spring Cup at Lingfield.

Haggas said: “He looks for all the world that he wants a mile, and we are looking forward to going up to a mile. It is a pretty flat track, and if you don’t get a mile at Chelmsford you won’t get it anywhere.

“It is a good race for him, because he doesn’t have to carry a penalty for winning a Listed race.

“I think the gelding operation may have helped him, but he has always had a bit of talent so he should run a good race.”