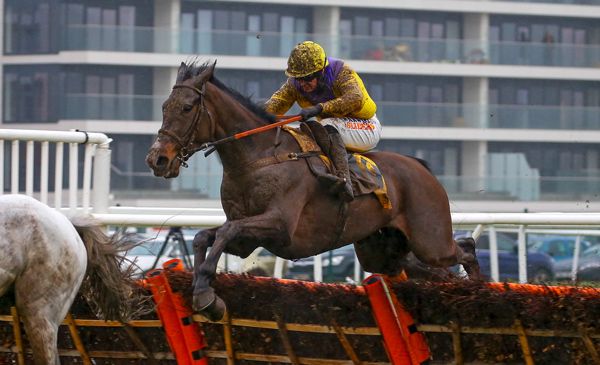 Kalashnikov - could be seen at Warwick next
© Photo Healy Racing

Amy Murphy will ready Arkle Trophy contender Kalashnikov for a return to Warwick in the Kingmaker Novices’ Chase.

Having had to settle for second in the Wayward Lad at Kempton over Christmas, last year’s Betfair Hurdle winner will now return to the scene of his debut win over fences for a tilt at the Grade Two contest on February 9.

Murphy said: “I’m almost certain Kalashnikov will go to Warwick for the Kingmaker, all being well, because the Lightning at Doncaster comes that bit too quick.

“At Kempton, he made two mistakes out of the first three fences, and he was on the back foot from there. He did very well to get back to where he finished, but take nothing away from the winner (Dynamite Dollars).

“It was always going to be quick enough for him at Kempton — because he wants a big, galloping track — but there wasn’t a lot of choice for him.

“The horse that finished back in third (Highway One O One) was rated 145 — so when you look at that he ran very well.”

The Newmarket trainler will not be seeing the Betfair Hurdle come her way for the second season in succession — because her entry in this year’s renewal, Esprit De Baileys, failed to qualify for the valuable Grade Three prize in time.

She added: “They are supposed to have had three runs before January 13, and they only told me that on Tuesday.

“His next run is the Grade Two at Haydock (Sky Bet Supreme Trial) on January 19, where he was hopefully going to get a mark, so annoyingly he will not be able to run.

“We didn’t even think about it last year, because Kalashnikov had run in the Tolworth.”