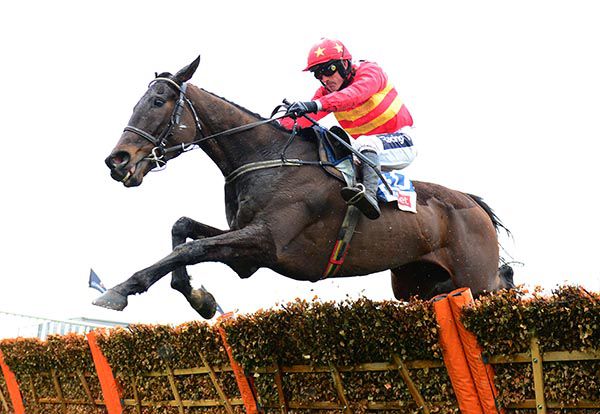 It is 24 years since the winning-most trainer in Festival history first landed the traditional curtain-raiser with Tourist Attraction (1995), since when he has struck gold with Ebaziyan (2007), Champagne Fever (2013), Vautour (2014) and Douvan (2015).

This year Mullins fired a twin assault, with 6-1 shot Klassical Dream renewing rivalry with stablemate Aramon after the pair fought out the finish of a Grade One at Leopardstown last month.

Ruby Walsh — the most successful jockey in Festival history — always had Klassical Dream in prime position as he tracked the pacesetting Brandon Castle before taking over the lead racing down the hill.

It was clear rounding the home turn the five-year-old — who was at the forefront of a false start to the race — had his rivals in serious trouble and he powered up the hill to score by four and a half lengths under a jubilant Walsh.

Mullins said: “It was a terrific performance and he is good horse. We took a risk running him on goodish firm ground at home, but we thought he had an engine on him.

“We debated whether to go for the other race (Ballymore Novices’ Hurdle), but when we saw this rain coming we said we would come for this race. The forecast was a big thing once we knew this ground was coming.

“He was well within his own cruising speed. He looks a real good one on this type of ground. He is a very good horse.

“We came away from his work at the Curragh last week thinking he was one that was going to take a lot of beating, no matter what he came up against.”

The winner was running in the colours of late owner John Coleman, and Mullins added: “It’s a very poignant victory for us, as John had a lot of cheaper horses with us and then he retired and sold his business and said ‘here is a few quid, go and buy me a Cheltenham horse’ and this was the horse.

“He passed away in the last few months. We’re here now so we’re going to have a lot of tears and beers celebrating this.

Joanne Coleman said: “It’s just a dream come true. My husband passed away in July and it was his dream to have a runner here.

“He never got to see him run at all. This is absolutely phenomenal. John’s ashes are in my handbag. He has not missed a Cheltenham for 20-odd years. To actually get a winner is incredible. It is absolutely mind-blowing.”

Murphy was delighted with the efforts of his pair.

He said: “I’m over the moon, they are two horses I’ve always held in high regard and they’ve finished second and third.

“I’m not someone who jumps up and down about finishing second and third, but it’s my first full season and I’ve got to keep telling myself that — to have two in a Grade One alone is great.

“The rain hasn’t helped either of them, they both want good ground. They were both given very good rides and unfortunately they’ve just bumped into a very good one.

“I’ll definitely step one of them up in trip, whether we go two and a half at Aintree or wait for Punchestown, as we’ve beaten the rest of the Irish and I wouldn’t be afraid to travel.

“I just wouldn’t be mad to run on this ground again.”