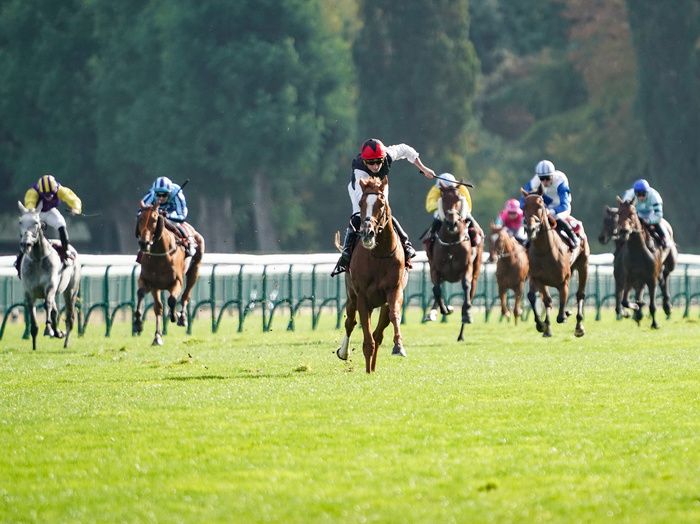 A clear favourite after winning each of his five runs this campaign, including the Gold Cup at Royal Ascot, the Goodwood Cup and the Irish St Leger, the chestnut ran in mid division under Ryan Moore until the turn for home, when he strode into a significant lead.

Though there was not a horse close enough to jeopardise his success, the colt did create a little drama in the final furlong as he veered dramatically left before the line.

His chances were never hindered, however, and he still prevailed by a massive 20 lengths from outsider Almacado Gree.

O’Brien said: “He’s an incredible stayer really. He has a massive engine, a huge heart and lungs obviously, and an incredible mind.

“Ryan rode him handy, they went a good gallop and they just fell away before they turned in and he got left in front.”

O’Brien felt Kyprios had his excuses for his dramatic late detour across the track.

He explained: “He got lazy and lonely in the straight. Ryan just felt the horse thought it was time to pull up and he thought the race was over before he turned in really.

“He saw the gate he came out of and thought ‘my job is over, it’s time to go home!’. He also lost a shoe in the straight, so that might be a little bit of a reason behind what happened as well.

“He has an awful lot of class. We felt we had no problem running over a mile and a quarter or mile-and-a-half championship races this year on his work in the spring.

“He’s an amazing horse really. In his work he never moves from second gear — we never are able to get him up into third, fourth or fifth gear, so he must have an unbelievable capacity for covering distance at pace.

“I think that’s probably him done for the year and I’d imagine we’ll go down the same route next season, hopefully.”

Kyprios ran out a 20-length winner, with Brian Ellison’s Tashkhan beaten a further length and a quarter in third.

The trainer said: “I’m delighted with him. the target will be back here next year. He’s pulled in plenty of money for a horse that cost 50 grand.

“We turned the tables on (Lonsdale Cup winner) Quickthorn but the winner is a machine.”