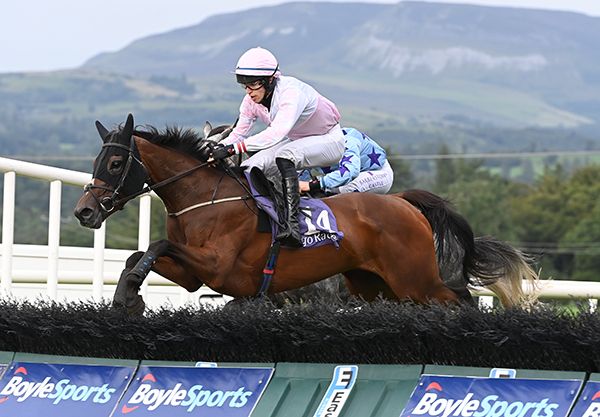 Ladiam gained compensation for a narrow defeat at Sligo last month when claiming the Hankook Pearse Rd Tyres Maiden Hurdle on the card this evening.

Norman Lee's charge had been nailed close home on her last visit to the track before finding Telecon too strong at Ballinrobe nine days later.

She went to post a 7/2 shot tonight and travelled well to challenge going to the second last in the two-and-a-half mile contest.

The Malinas filly wasn't fluent there but soon recovered, under Paddy O'Hanlon, and was driven to the front going to the final flight.

Lee, who led up the winner, said: "She was chinned on the line here two runs ago. I told Paddy to wait as long as he could today and not hit the front too soon. She travelled everywhere and did it very well.

"She's a grand honest little filly who was bought off Done Deal for small money.

"She probably wants this trip and would stay three miles. She'll jump a fence too even though she's only 15.2.

"We'll give her a run or two in novice company while the ground is still there and she'll get a nice break then."