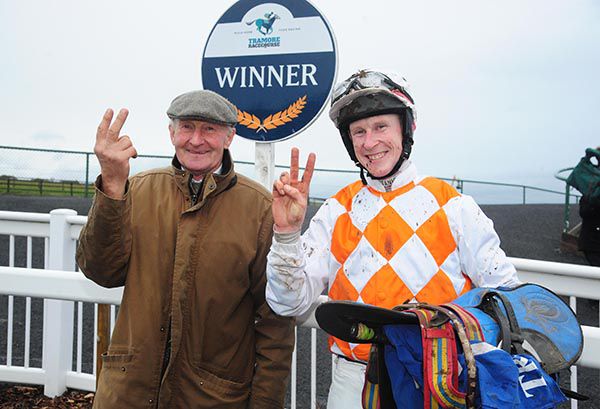 Ryan had a double at Fairyhouse recently but this 98/1 brace was a first for Austin and it came with the half-siblings, Red Lemonade (a mare by Mountain High out of Deep Gold) and Highest Benefit (a gelding by Beneficial out of Deep Gold).

Red Lemonade won by just a head earlier in the two mile handicap hurdle but it was more convincing for Highest Benefit as he got the better of the well-backed favourite Golden Sunset by two and a quarter lengths.

Ten-year-old Highest Benefit was winning his second race, this one coming off a 227 day break.

“The two winners are out of the one mare. Our horses have never been better - they're in great form," reflected Austin, who is possibly best known as the breeder of Danoli.

“I want to thank Trevor Ryan who rides out for me two days a week. He’s flying it and is great value for his 7lb claim.

For his part Ryan said: "That was brilliant, he did it easy in the end and was in his comfort zone the whole time. He always threatened to win some of these races but these types of handicaps aren't in the programme for him. Every time he gets in this grade he runs well.

"It's been a great day for the dam they have, it keeps the pages going for selling horses for the future."