Lapilli wins the opener for English and Whelan 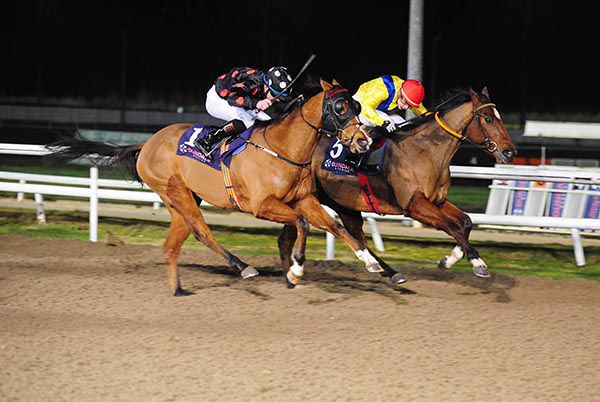 Fifth to Red Cymbal a week previously over course and distance, the 10/3 favourite Lapilli turned things around with that one to take the opening View Restaurant January Special Handicap.

Ronan Whelan’s mount led over a furlong out, and kept on well to deny Red Cymbal (11/2) by a head, with Bellick (14/1) half a length further away in third.

The winning seven-year-old, by Bahamian Bounty, had a better draw this evening and was better off at the weights compared to last week, albeit Anthony McCann’s runner ran right to the line and lost little in defeat.

The first two home both started their careers with William Haggas, and Lapilli won three of his first four starts in England before coming to race in Ireland.

A winner over 6f for Denis Hogan last year at Dundalk, this was his first win in his second spell with trainer Damian English.

“It's just confidence with him, he had lost his confidence but he's going the right way and I definitely think a step up in trip is the way forward now. If he stays seven he'd be some horse.

“I thought he might just lack a bit in a battle but he really, really tried.

“I think stepping up to six but if he stayed seven he could be something else and could go right back up to the high 80s again. He's a really good horse.”