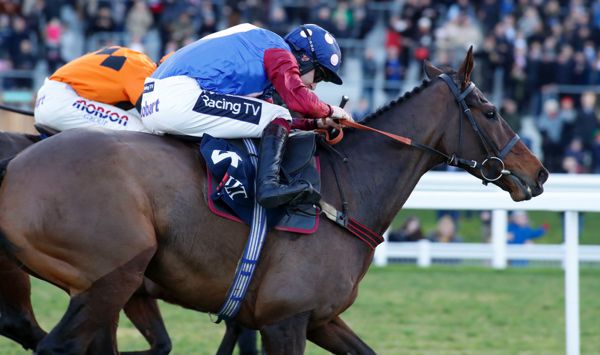 Emma Lavelle is hoping Paisley Park’s transformation into Britain’s leading long-distance hurdler and title pretender can last one more race and deliver her a first championship-race victory at Cheltenham next week.

Since finishing 13th, beaten 54 lengths, in last year’s Albert Bartlett Novices’ Hurdle, Paisley Park has been undefeated, putting together a sequence of impressive wins that culminated in a 12-length success in the Cleeve Hurdle at Cheltenham on Festival Trials Day.

As a result he is be one of the hottest favourites of the four-day meeting to win the Sun Racing Stayers’ Hurdle, where another triumph for his 66-year-old owner Andrew Gemmell, who has been blind since birth, would deliver one of the most popular successes of any festival.

Preparing horses for Cheltenham can be a stressful process, but Lavelle feels no extra pressure from being responsible for one of the week’s bankers, nine years after she and husband Barry Fenton enjoyed the last of two Festival wins.

“The pressure for us isn’t about whether he is favourite or not,” she said. “The pressure is about getting the horse to the races in the form that he has been all year if not better.

“We want to win a championship race. We’ve won two handicaps. We have a nice horse that has a genuine, proper chance.”

Paisley Park will have one more piece of work and one more schooling session this week in what has been a smooth preparation.

“Touch wood it has been great,” she said. “You keep pinching yourself it will stay like that.

“In each race he has got progressively better. It’s the stuff that dreams are made of and you are kind of just hoping can we last a little bit longer.”

Paisley Park has only run nine times, his early career held up by a form of grass sickness that could have proved fatal.

He did not have his first race over hurdles until 16 months ago in a novice campaign that had yielded a win and two seconds by the time he went to last year’s Festival.

“The waters had been muddied by the fact that I expected him to go and win at Doncaster and he got beaten,” said Lavelle. “He probably should have won but ran down the last a bit and we felt he just wasn’t focussed.

“So I put a visor on him for Cheltenham for the first time at the races. Over three miles on heavy ground he was far too keen. I also don’t think he was mentally or physically ready for Cheltenham at that point. He probably wasn’t 100 per cent and it all went pear-shaped.”

This season Paisley Park has won handicaps at Aintree and Haydock before announcing himself as championship calibre with success in the Grade One Long Walk Hurdle, and then the Cleeve. He is also unbeaten under Aidan Coleman.

“We always thought he would be a nice horse,” said Lavelle.

“In his first run over hurdles he beat Vision Des Flos. I did think he was very well handicapped when he went to Aintree first time out off a mark of 140.

“But did I think he would be favourite for the Stayers’ Hurdle in March after last season? That would be ridiculous.”

She continued: “The thing that has made this horse is time, Barry riding him at home to develop his confidence and Andrew being prepared to give him time.”

Paisley Park has beaten the best in Britain but is untested against the Irish, who will be led by Faugheen and Supasundae, just as they are against him.

“Faugheen has been such a special horse for such a long time,” said Lavelle.

“We’ve got age on our side, but he’s got experience and if he runs as well as he did at Punchestown he’s definitely going to put it up to us.

“It’s a shame not to see the defending champion Penhill but there are always going to be horses that will come out of the woodwork for these kinds of races.

“Paisley Park has still to turn up there in tip-top form for us to win a race like that, regardless of what else is in there.”

He will be one of two runners for Lavelle whose two previous triumphs were with Crack Away Jack in the 2008 Fred Winter and Pause And Clause in 2010 Martin Pipe.

“Crack Away Jack was our first and it was a phenomenal,” Lavelle recalled. “It was a masterclass from Paul Carberry of how to deliver one at the perfect time.

“When we had our second win with Pause And Clause I thought immediately after we should take time to enjoy it because everything went by so quick the first time.

“We have had a few near-misses. Shotgun Paddy was beaten a neck in the four miler. Claret Cloak was third and if he had jumped the second-last he should have won the Grand Annual.

“We’ve been hitting the crossbar but it would definitely be nice if we could win again.

“We will have a select team of two this year. Flemcara will run in the Pertemps Final, also on Thursday, and he in his own right goes there with a chance. It means we will be busy with other things to do rather than waiting all day until the Stayers’.”

Paisley Park is named after the home of the late US eighties pop star Prince and connections would be celebrating a fifth number one of the campaign if he scores in the Stayers’.

“Andrew is an unbelievable man to consume alcohol and walk in a dead straight line,” said Lavelle. “So I would imagine that if it all panned out the way we hope we would definitely be partying like it’s 1999 — and 2000 and 2001.”