Lee & Hackett on the mark with Seamie 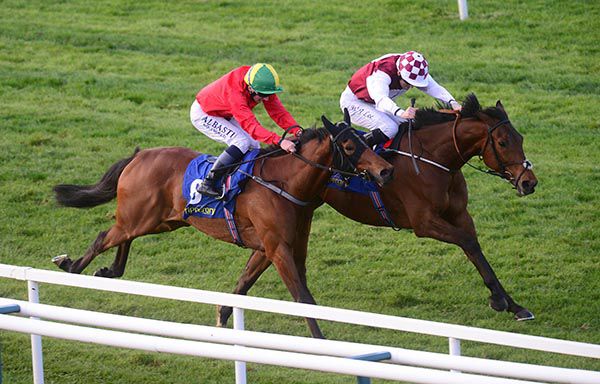 Rock On Seamie sprang a surprise in the second divide of the Visit Tipperary Handicap, scoring under Billy Lee for Ray Hackett.

The four-year-old son of Lilbourne Lad had shown very little in six previous efforts on the level, but was a close up fifth on his most recent start over flights at Limerick last month.

Settled in mid-division, the bay victor made progress into third entering the straight and was soon pushed along.

He had a good battle with Acari from the furlong pole, and just a neck separated them at the line.

Acari was returned an 11/2 chance (from 7s) under Chris Hayes for Bernard Caldwell, while Our Anniversary (33s this morning and from 16s to 14s on-course) was a further three lengths back in third.

The ten-year-old Punches Pious (12/1) completed the places in fourth, while the 9/2 favourite Santorini Sun was a disappointing ninth.

Hackett, who also owns the winner, said afterwards: "The hurdling stood to him as he fought it out well today. It wasn't the strongest race in the world but it is great to get a win at any level.

"I'll see how he comes out of it but he is in a 1m 3f handicap at Limerick on Saturday and if he is okay we'll go again. He takes his racing very well and was just unlucky with problems last year when he missed most of the year.

"Hopefully we'll knock a bit of fun out of it."