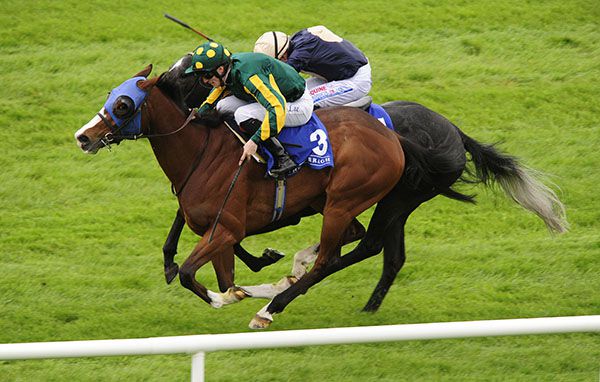 On the day when the Curragh unveiled its new stand to the public for the first time, Billy Lee dominated proceedings at headquarters by completed a 370/1 treble as Verhoyen defied top-weight in the Curragh Where Champions Are Made Handicap.

The Michael Grassick-trained gelding has been slowly away on a few occasions in the past but put that right here when prominent throughout in this 30-runner sprint.

The 10/1 chance was strongly pressed by Cruella Dovil at the furlong pole but rallied strongly in the closing stages to prevail by a neck as the pair pulled five lengths clear of the remainder.

A high draw proved no harm here as the first three home came from stalls 25, 28 and 30.

Lee, who was on the mark earlier in the opening two races aboard Sunday Sovereign and Ickworth said “Today he hit the stalls right and he was out and gone. He has that level of ability that he’s able to carry that weight in these sort of handicaps.

“When nothing got to me at halfway I was able to coast away, and after Niall (McCullagh on Cruella Dovil) got to me in fairness he stuck his head out and battled to the line. He’s a clever old boy and was saving a bit for himself.

“I had nice rides coming here today and was confident that they would be running well. You would be hoping to ride a winner or two but to ride three is great.”

Local trainer Grassick was opening his account for the season and said, “He was due one. He reared up as the stalls opened last time at Navan and was only beaten half a length. He pinged the gates today and I told Billy not to disappoint him.

“In fairness he battled today which has always been a question mark on him. He was second in a Listed race as a two-year-old so he has lots of ability. He’d work as well as Texas Rock in the morning and is the only one that can go with him.