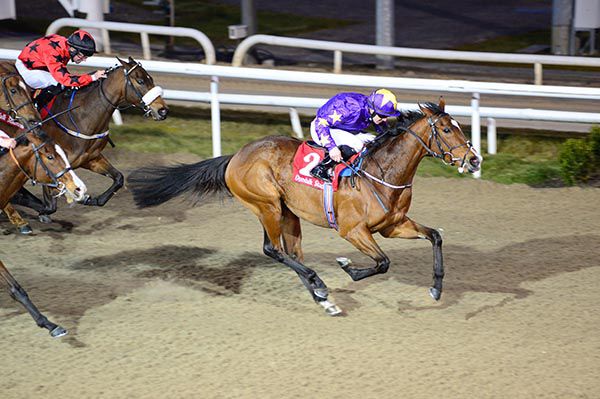 After winning the opener on Plough Boy Wayne Lordan doubled-up on Highly Approved in the 32Red Handicap.

Successful over the course last month, the Joseph O'Brien trained bay opened on-course at 4/1 this evening before going off the second choice of punters at 3s.

Prominent throughout, the daughter of Approve was ridden to the front over a furlong out, and she kept on well from there, going on to score by three parts of a length. Downtown Diva (20s to 16s) kept on well to take second under Shane Foley for Jack Davidson, while Taylor Velvet (16/1) was another half a length back in third for Rory and Tom Cleary. Patrick Joseph was sent off the 6/5 favourite, and he could only manage a disappointing fifth with Pat Smullen in the saddle for David Marnane.

"I thought that was good. As I said the last day she's been very consistent, she stepped up to seven today and it wasn't an issue," said Lordan.

"She's a grand filly that enjoys this place and handles the surface well.

"She got plenty for winning last time but when you have a filly like that, that may be improving a little bit and enjoying racing, they keep stepping forward and that's the way she seems to be.

"Winning last time probably helped her confidence. She was getting left a bit in the stalls but that's been ironed out now and the last twice she jumped well, got a good position and won. Everything is falling right for her."

The Stewards interviewed S. Foley, rider of Downtown Diva, concerning his use of the whip in the closing stages of this race. Evidence was heard from the rider concerned. Having viewed a recording of the race and considered the evidence the Stewards were of the opinion that S. Foley was in breach of Regulation 10.4 in that he used his whip without giving his mount time to respond. Having considered his previous record in this regard, the Stewards cautioned S. Foley.

Mr. P.N. Reynolds, Chairman, absented himself from this enquiry which was chaired by Mr. S. Barry.