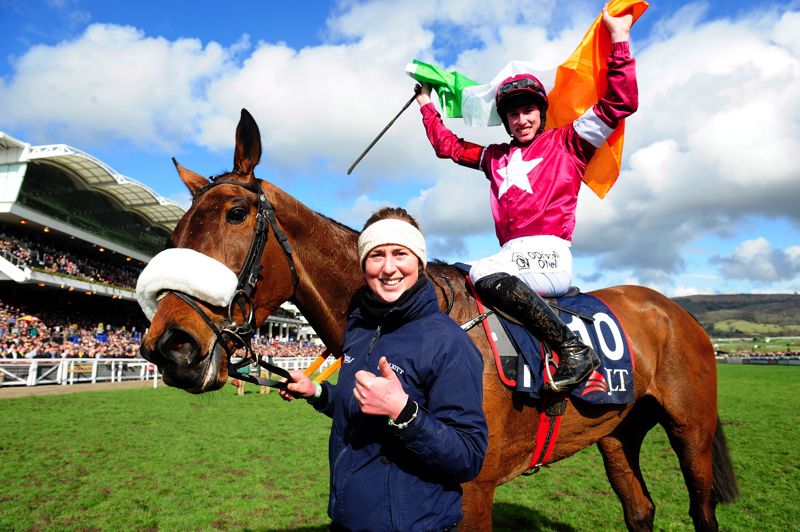 Shattered Love will sidestep the Unibet Irish Gold Cup at Leopardstown and instead head straight to the Magners Cheltenham Gold Cup in March.

Gordon Elliott’s mare claimed Cheltenham Festival glory in the JLT Novices’ Chase last season, and made an encouraging start to the current campaign with runner-up finishes at Down Royal and in the John Durkan Memorial Punchestown Chase.

However, she trailed home last of 10 finishers in the Savills Chase at Leopardstown last month — and after she returned home sore, Elliott is planning to keep her fresh for a tilt at the blue riband at Prestbury Park.

Speaking on Wednesday at the launch of the Dublin Racing Festival, Elliott said: “She won’t be running in the Irish Gold Cup, because she came home with sore shins from Leopardstown the last day.

“For me the ground will definitely be too quick to run her and we’ll go straight for the (Cheltenham) Gold Cup with her.

“She’s back hacking away steady. But I don’t want to take a chance on that type of ground again with her, because I could mess the rest of the season up if I did.”

The Cullentra handler still plans to be represented in the Irish Gold Cup, adding: “I’ll probably run three in it — Noble Endeavor, Outlander and The Storyteller.”

The horse priced up as favourite for the feature event on day two of the Dublin Racing Festival is Noel Meade’s Road To Respect.

The eight-year-old was last seen finishing third behind the impressive Kemboy when defending his crown in the aforementioned Savills Chase after stumbling badly into the home turn.

Meade said: “Everyone saw what happened in the race, and they can make up their own mind as to what might have happened.

“The winner was very good, and I was happy with the way our horse finished and that he ran home.

“It was just unfortunate that he slipped twice, but that’s the way it goes.

“I’m just happy my horse came home safe and sound, and hopefully we get him back in as good a shape again.”

Road To Respect could renew rivalry with Henry de Bromhead’s Monalee, who won the battle for second by just a head.

“We were happy with his run at Christmas. We’re aiming for the Irish Gold Cup, but he’d probably want a bit more ease in the ground for us to run, which hopefully we’ll get,” said De Bromhead.

Joseph O’Brien’s Edwulf was a shock winner of last year’s Irish Gold Cup, but has not managed to replicate that form since.

O’Brien said: “Unless the ground happened to be very soft, he’s probably going to struggle again.”