Madhmoon 'bombing' ahead of Derby rematch 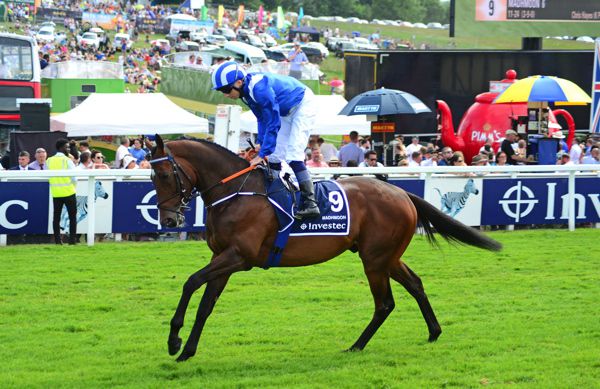 Anthony Van Dyck, Madhmoon and Broome are all set to renew their Epsom rivalry in the Dubai Duty Free Irish Derby at the Curragh this Saturday with the trio appearing amongst the ten entries for the 154th running of the country’s premier classic following the latest forfeit stage today.

Aidan O’Brien, who has six entries to rely on, will be bidding to make it 13 victories in the race while Kevin Prendergast is chasing a first win in the race with Madhmoon who came so close to pulling off a fairytale success when second to Anthony Van Dyck at Epsom last month.

Curragh-based legend Prendergast came closest to Irish Derby success when Ragapan finished second to Weaver’s Hall in 1973 and he reports his latest challenger for the race to be in excellent shape.

“He just got nailed at Epsom but hopefully we can supplement it with an Irish Derby on Saturday,” said the Curragh trainer.

“He’s a good horse, he’s got a good chance. Hopefully he will run as well as he did at Epsom and he might get a good result on Saturday. He’s bombing, he couldn’t be better, he’s in good nick and should run a good race. With a bit of luck on his side he might get the nod,” added Prendergast.

Meanwhile, Aidan O’Brien reports his powerful six strong team to be in good shape for a race run over what he described as probably the fairest mile and a half in the world.

After his heroics at Epsom Anthony Van Dyck will head the Ballydoyle trainer’s team for what will be the twelfth running of the race under the Dubai Duty Free Irish Derby banner. O’Brien could also rely on Broome, Il Paradiso, Norway, Sovereign and Western Australia.

Saturday’s card also features a high class edition of the Group 2 GAIN Railway Stakes where the unbeaten Siskin is set to line up after skipping Royal Ascot. Aidan O’Brien has left in the Coventry Stakes winner Arizona but did indicate that this race could see the second appearance of the exciting Monarch Of Egypt.

Monarch Of Egypt lived up to a lofty reputation when becoming the first winning son of first season sire American Pharoah at Naas in April but hasn't run since.

"We are thinking of running back Monarch Of Egypt in the Railway Stakes," O'Brien confirmed today. "We were to go to Ascot with him but he had a little bit of a setback so he's just ready to start back now at The Curragh. We might have something else to go with him as well."