Magna Grecia and Too Darn Hot square up at Curragh 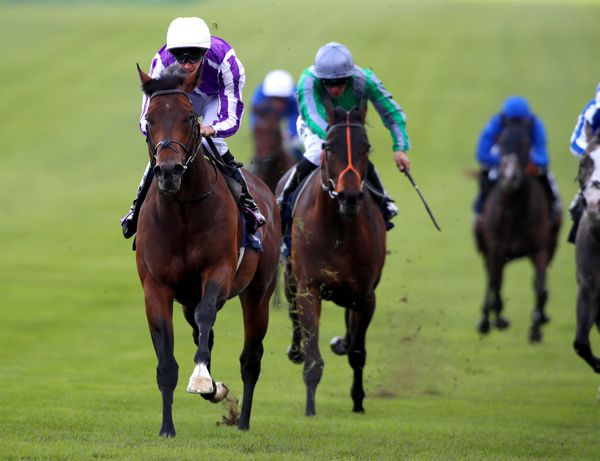 The big showdown is on after Magna Grecia and Too Darn Hot were among 14 declared for the Tattersalls Irish 2,000 Guineas at the Curragh.

Saturday’s Group One was named as Magna Grecia’s next target after he won the Qipco 2000 Guineas at Newmarket for trainer Aidan O’Brien — but Too Darn Hot’s inclusion came as a late surprise just a few days ago.

The John Gosden-trained colt made his seasonal debut at York last week when second in the Dante Stakes over an extended mile and a quarter.

Too Darn Hot had to miss the 2000 Guineas because of a setback, having been ante-post favourite all winter following a flawless juvenile campaign that saw him crowned champion European two-year-old.

Connections have taken the brave decision to run him again quickly in a bid for Classic glory, and run him over a mile for the first time since his debut at Sandown in August.

Explaining the decision to go to Ireland before the St James’s Palace at Royal Ascot, Gosden said: “He has got a great constitution and he wants to race, this horse.

“It is a long wait from the Dante to Ascot and I thought he would get fresh and frustrated, so we decided to let him race.

“We go there fully aware it is not a conventional preparation, but we are happy with him.

As well as Magna Grecia, O’Brien calls on Globe Theatre, Mohawk, Old Glory and Van Beethoven as he seeks to add to his record haul of 11 Irish 2,000 Guineas triumphs.

Supporting the British challenge are William Haggas’ Skardu, third to Magna Grecia at Newmarket, and Kevin Ryan’s Emaraaty Ana — who was well down the field that day.

Haggas said of his Craven winner on Thursday: “Skardu had a spin this morning and we are all set to come over to the Curragh providing the weather stays fine.”

Charlie Hills sends over Phoenix Of Spain, runner-up to Too Darn Hot in the Champagne Stakes and to Magna Grecia in the Vertem Futurity Trophy at Doncaster on his last two starts.

Completing the list of Classic hopefuls are Decrypt, Guaranteed, Hillwalker, I Am Superman and Shelir.

The two withdrawals at the 48-hour final declaration stage were Martyn Meade’s Confiding and the Damian English-trained North Wind.