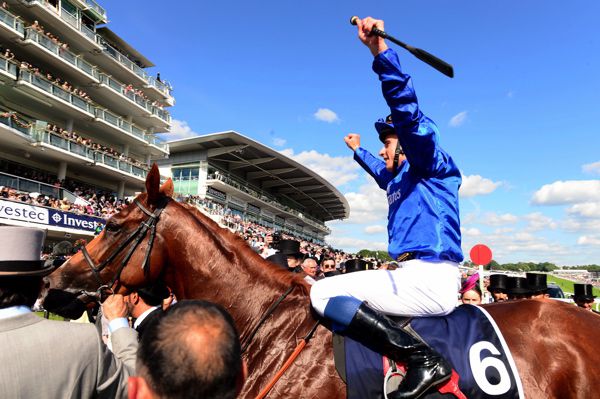 Charlie Appleby is confident Masar’s powers remain very much intact ahead of his much-anticipated return in Saturday’s Hardwicke Stakes.

The New Approach colt became the first horse to carry the royal blue silks of Godolphin to victory in the Investec Derby at Epsom last season, but a leg injury kept him off the track for the remainder of the campaign.

Appleby has been aiming his stable star at Royal Ascot for some time, eventually opting to run in this mile-and-a-half Group Two over the 10-furlong Prince of Wales’s Stakes — a decision he is more than comfortable with after watching Wednesday’s Group One feature.

“It has been the plan for some time to bring him back at this meeting and we’re looking forward to running him,” said the Newmarket handler.

“We considered the Prince of Wales’s Stakes, but after watching the race on Wednesday — up against that competition and the way the ground was — I think we’ve made the right call. He wouldn’t have run on Wednesday had we declared for the Prince Of Wales’s.

“His preparation has been great and he has hit every target during his recovery. He has definitely come forward for the piece of work we saw at Newmarket and I just can’t wait for the race to come now.

“If he can show on Saturday afternoon what he’s been showing us in the mornings, he’ll be a live contender.”

Bringing the Derby hero back to the racecourse after over a year on the sidelines undoubtedly comes with plenty of pressure, but Appleby is relishing the challenge.

He added: “I’m very fortunate that throughout my career the horses have taken the pressure for me — those good horses just turn up on the big day and that’s why they are who they are.

“Masar has been there and done it and looks fantastic. I can’t fault the horse and I’m looking forward to it.”

Sir Michael Stoute has saddled a record 11 previous winners of the Hardwicke — including eight of the last 13.

This year the master of Freemason Lodge saddles Mirage Dancer, a son of Frankel who made a winning reappearance in a Listed event at Goodwood.

Teddy Grimthorpe, racing manager to owner-breeder Khalid Abdullah, said: “Mirage Dancer is going very nicely. They have done fantastically well with him as he had an unhappy trip to and back from Hong Kong last December.

“It was no fault of Hong Kong, it was just unlucky the way things panned out, but he has come back very nicely.

“He had a smooth run at Goodwood. He is stepping back up to Group Two company again, but we have got Sir Michael’s good history in the race on our side. Whether that counts for anything, I don’t know, but he does know how to train a Hardwicke winner.

“He goes there with a nice chance — he just has the tiny matter of taking on last year’s Derby winner.”

Roger Varian’s Defoe bids to follow up his Coronation Cup victory of three weeks ago.