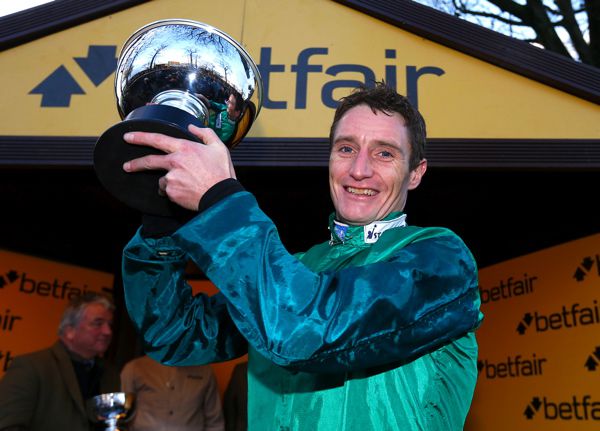 French raider Master Dino signalled his Cheltenham credentials with an authoritative victory in Plumpton’s Follow At The Races On Twitter Novices’ Chase.

Master Dino, a first winner in England for Guillaume Macaire since December 2012, never allowed the front-running second-favourite Knocknanuss too much leeway and then pounced at the second-last before powering seven lengths clear under Daryl Jacob.

The 11-10 favourite has therefore put himself on course for a £60,000 bonus, should he go on to win any race at the Cheltenham Festival.

And Macaire quickly confirmed his charge is highly likely to run in the two-and-a-half mile JLT Novices’ Chase in March — rather than the Arkle Trophy — after first taking in Sandown’s Scilly Isles as his next race.

France’s multiple champion trainer told Sky Sports Racing: “The next step is Sandown, then the middle distance (JLT) at Cheltenham.

“In my opinion, the Arkle could be too fast for him. He used to be a bit keen at home, but I’ve worked a lot on relaxing him — so now he won’t understand if we ask him to do that.

“We’ve worked many months to have a horse able to manage his potential himself — so it would be silly to try to do the reverse.

“I will enter him anyway in the Arkle, but the target is the middle distance. That’s the logical (step).”

Whichever is Master Dino’s Cheltenham target, after his successful British debut in a race touted as one of the best in Plumpton’s history, he is sure to command huge respect.

Macaire is delighted his Grade One-winning hurdler adapted so well in a different country, after just one chase start in his homeland.

“I’m very pleased, because it was a test today — he doesn’t speak English, only French!” he added.

“He’s learning, but it’s the first time for him.

“The ground is rarely deep at Cheltenham, so this experience will be very useful — because he’s shown he’s able to follow a good pace but also has stamina.

“He stays, and was not tired at all after the race — which is a good sign.”

Winning jockey Jacob, the owners’ retained rider standing in for Master Dino’s injured regular James Reveley, had to get serious as Knocknanuss tried to pile on the pressure again at the end of the back straight.

But by the line, the winner’s superiority was very evident.

“Jamie Moore went very quick up front (on Knocknanuss) — (but) this is a good horse,” said Jacob.

“I just said to Guillaume and Anthony (Bromley) everything was against him today — track, the ground — it was all against him, and he still pulled up on top.

“That’s phase one over with now, and we can look forward to the Scilly Isles — which I think he will be much more suited to.

“The whole experience is what we wanted. He’s passed it.”