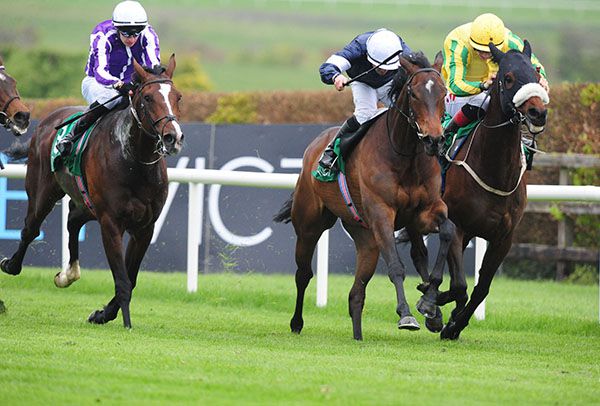 His gritty staying performance off the front end earned him a 20/1 first quote from Paddy Power for the Ascot Gold Cup.

In the hands of Wayne Lordan, the Frankel gelding, for leading Australian owner, Lloyd Williams, held Mustajeer (12/1) and Southern France (2/1 second favourite) by a neck and three parts of a length.

Market-leader Capri (5/4) had to settle for fifth.

O'Brien was also on the mark at Sligo with Little Light and he said: "He had good form in France and I thought he would need the run. Wayne (Lordan) kept it nice and simple on him because he is an uncomplicated horse.

"He stays and goes well and is a well-bred horse. He had two ordinary runs for me last year but it is hard swapping mid-season from France to here.

"We gave him time and I'm delighted for Lloyd and Nick. They sent him to me with a big reputation and it didn't work out last year and they gave us another chance with him.

"We'll have to train him for a Gold Cup now. He stays and he is going to come on a bit for the run I'd say. We'll see what happens. He's an uncomplicated horse.

"He had been working well but to be honest I didn't think he was fit enough for his first run, I thought he would come on a bit from it. It is probably testament to his attitude to tough it out."

Following a report from Ms. Joan Taylor, Irish Horseracing Regulatory Board Veterinary Officer, The Stewards interviewed Ms. Ellen Renwick, authorised representative of Iain Jardine, regarding a request to administer glycerine to Nakeeta prior to racing. Ms Renwick stated that she had followed normal procedure as per racing in England whereby the use of glycerine is permissible in accordance with British Horseracing Authority Regulations. Evidence was also heard from Ms Joan Taylor. Having considered the evidence, the Stewards did not allow the request to administer glycerine in accordance with Regulation 9.

The Irish Horseracing Regulatory Board Veterinary Officer examined Capri, trained by A.P.O'Brien, at the request of the Stewards and reported the animal to be post race normal.