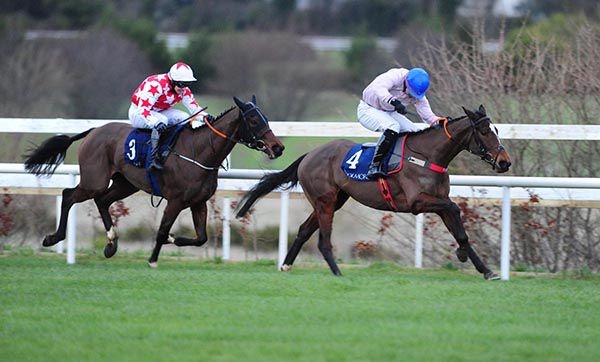 Dermot McLoughlin is eyeing a trip to Aintree for his high-class mare Santa Rossa.

A surprise winner on her racecourse debut at Fairyhouse in December, the daughter of Jeremy confirmed that performance was no fluke with a decisive victory in the Grade Two mares’ bumper during the Dublin Racing Festival at Leopardstown.

She is a best priced 25-1 for the Champion Bumper at next month’s Cheltenham Festival, but looks likely to instead head to Merseyside.

McLoughlin said: “A decision has yet to be made on where Santa Rossa will go, but the owner is leaning towards going to Aintree.

“She’s only had two runs and has two wins, and is improving all the time. She was very good the last day, and I think there is a bit more left in her.”

One McLoughlin inmate who is set to head to Cheltenham is Canardier.

The seven-year-old has been off the track since winning at Prestbury Park in October but is set to return to action in the Cotswolds — where he holds entries in the Ballymore Novices’ Hurdle, the Coral Cup, the County Hurdle and the Martin Pipe Conditional Jockeys’ Hurdle.

“Canardier was meant to run in Wetherby, but it was called off a fortnight ago. He ran in a schooling race at Punchestown on Friday and went well,” McLoughlin added.

“He has a few options at Cheltenham, and will probably go for one of the handicaps.

“The ground is a big factor to him — because he wants it good — so I hope it stays like this for the next few weeks.”