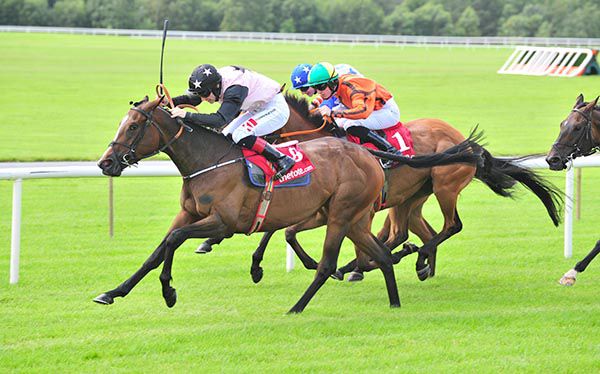 Dream Point landed a gamble in the opener at Ballinrobe this evening, the Tote Supporting Ballinrobe Racecourse Claiming Race.

Unsuccessful in twelve starts for Joseph O'Brien, the daughter of Iffraaj was bought by Andrew McNamara for E9,000 at Goffs last November.

On what was her fifth start for McNamara today, she was available at 10/1 in early shows, opening on-course at 9/2, before going off at just 7/2 in the colours of the Boyne Valley Syndicate.

Settled in mid-division by Colin Keane, she needed to be switched wide from the two furlong pole and was soon ridden to challenge.

In front with 150 yards to race, she extended her advantage in the closing stages, going on to prevail by a length and a half.

The Denis Hogan pair of Eastern Racer (5/2f) and Commander (7/1) finished second and third, with just half a length between them at the line.

"She had a lovely run one night at Leopardstown and then the draw was against her last time at Bellewstown," said McNamara.

"That form has worked out and it mightn't have been as bad a run as it looked at the time.

"She did it well enough there and she'll go for something similar if we hold on to her."

After the race there was three claims for Dream Point (E8,000) with James McAuley the successful bidder. The winner will now be sent into training with Denis Hogan.

J.A. Heffernan, rider of Stormy Air (GB), trained by Denis Gerard Hogan, reported to the Stewards' Secretaries that his mount met with interference soon after jumping from stalls.

The Stewards enquired into two incidents on the approach to the first bend, the first involving Eastern Racer, ridden by J.M. Sheridan, Grove Hill ridden by G.F. Carroll, Stormy Air (GB), ridden by J.A. Heffernan, and Taylor Velvet ridden by A.J. Farragher. Evidence was heard from the riders concerned. J.M. Sheridan gave his evidence in the presence of D.G. Hogan, Trainer. The second incident involved Commander (GB), ridden by K.J. Leonard and Grove Hill, ridden by G.F. Carroll. Evidence was heard from the riders concerned. Having viewed the recording of both incidents and considered the evidence, the Stewards found that both incidents were caused by accidental interference and took no further action.