Meade doubles up with Molly 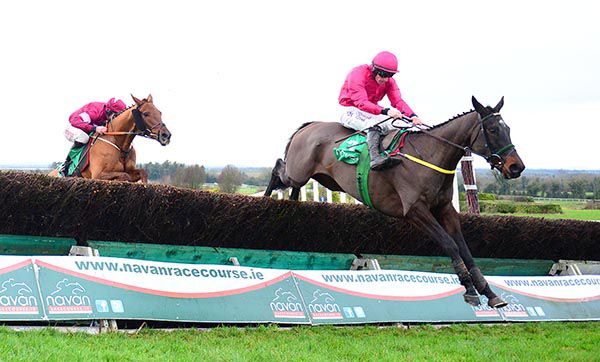 Noel Meade secured a quick double at Navan this afternoon when He's No Molly continued his winning run on his debut over fences in the rated novice chase.

Sean Flanagan's mount jumped into the lead five from home in the two-and-a-half mile contest and the 3/1 favourite proved tough in front down the home straight. Sir Carno looked a big threat as he challenged three from home but couldn't find a way past He's No Molly, who stayed on strongly from the last to record a length-and-a-quarter success.

Patricia Hunt's Beneficial gelding came into the race having won his last two outings over timber, in October.

Meade said:- “I thought that he’d done as much as he was going to do over hurdles.

“He’s a bit one paced but he jumps very well so that’s why I put him over fences as soon as we did.

“He did what we thought he would do and he’s certainly going to be better over three miles. I don’t know where he will go next but he’ll stay over fences.”