Mindsmadeup a winning spare for Flanagan 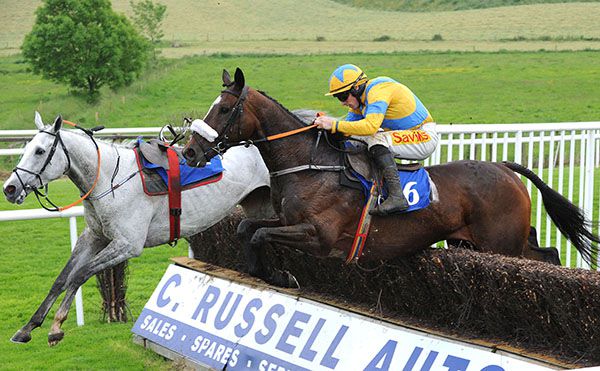 Mindsmadeup brought up plenty of bets in the extended two mile seven handicap chase at Downpatrick and was a winning spare ride for Sean Flanagan.

Flanagan came in for the ride because Bryan Cooper, who won the previous race on Demi Plie felt unwell.

The eight-year-old gelding was backed from 11/1 in the morning, 11/2 on opening show and finished up 3/1 favourite.

He tracked front-running School Lane with the pair clear three out. He was steered into the lead at the penultimate fence and stormed home by 17 lengths.

School Lane (7/1) could make no impression and finished second, some 11 lengths clear of See Double You (14/1).

Trainer Matthew Smith said: "He wouldn't show you a whole lot at home and I didn't know what to expect but he had great placed form with James Sheehan. I'm delighted with him.

"We'll keep him going over the summer - he has form over a variety of trips, over two miles and further.

"Based on that yes I would (be looking at a good pot over the summer). I'm still learning about him.

"When he came first he was a bit keen and free and that but he settled well there for Sean. He gave him a lovely spin around."