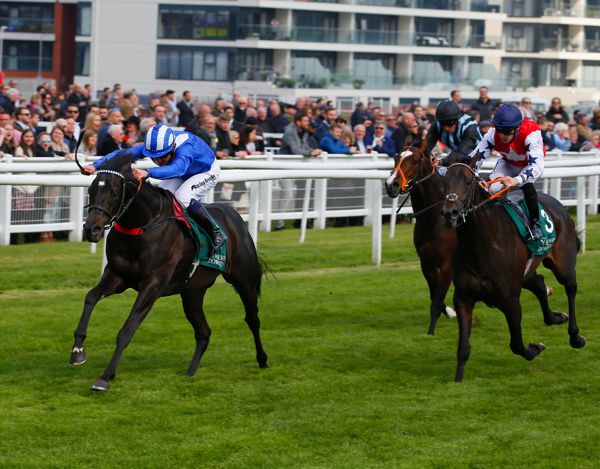 Mohaather emerged as a genuine Qipco 2000 Guineas contender with a clear-cut success in the Watership Down Stud Greenham Stakes at Newbury.

Successful in the Horris Hill Stakes on his final start at two, he was sent off a 9-2 chance in the absence of Classic favourite Too Darn Hot, who had been expected to make his reappearance.

The result was never in much doubt as Jim Crowley sat motionless on the outside of the field on the Sheikh Hamdan-owned colt before taking up the running from Boitron.

Briefly, Urban Icon looked like he might be able to get on terms — but Mohaather pulled out more, and it was Great Scot who ran on into second for Tom Dascombe.

For winning trainer Marcus Tregoning, the Derby success of Sir Percy in 2006 will seem an awful long time ago — but he will head to the first Classic of the season this year with a viable contender.

Tregoning said: “That’s job done. I’m very pleased and he has been working great — you never know at this time of year when the weather is so changeable, but he looked brilliant. He is very fit and has done plenty of work.

“I think he did his first bit of work on January 29, so we have kept him going. I did that in case we had to have a stop of some sort and we’ve had no stops really, we’ve had a nice, clear run.

“Hopefully he can progress and I’m sure he will, as he has got a good temperament. We could have a bit more cover if we wanted to, but he wasn’t free or anything and that’s what I like about him, he settles so well.

“I’m not saying he won’t go on fast ground, as he has got a beautiful action. Jim said he will probably go on any ground, but he has got speed and Showcasing (sire) has had a wonderful start.

“He has got plenty of pace, personally I think he will get the mile on faster ground, but they go a different pace and there are many more runners in the Guineas and it is a different test.

“It will be entirely up to the management where he goes, but I’m thrilled we have got this far.”