Mohican out to hit Heights at Sales 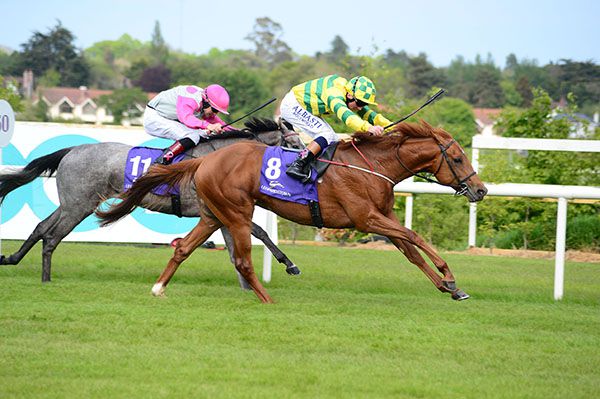 Exciting juvenile Mohican Heights is set to go under the hammer at the Goffs London Sale on the eve of Royal Ascot.

Fozzy Stack’s youngster created a big impression on his racecourse debut at Leopardstown last month — making every yard of the running on his way to an authoritative success.

The form received a timely boost when the runner-up Lil Grey went one better at the Curragh last Friday, and Stack is looking forward to seeing his charge run in Ascot’s Chesham Stakes — but it remains to be seen whose colours he will be carrying.

Stack said: “He’s in good shape and the plan is for him to go to the sale on Monday night and then go for the Chesham.

“We’ve been happy with him since Leopardstown and the form is working out well.”

Mohican Heights is likely to be part of a small but select Stack squad bound for Berkshire next week.

The Cashel-based handler is also considering Back To Brussels (Queen Mary) and Zihba (Wolferton Handicap) for the trip across the Irish Sea, as well as American Lady.

Like Mohican Heights, the latter is set to be sold on the eve of the Royal meeting before running in either the Queen Mary or the Windsor Castle Stakes.

American Lady remains a maiden after four starts, but did finish a promising fourth in a Group Three at Naas on her latest start.