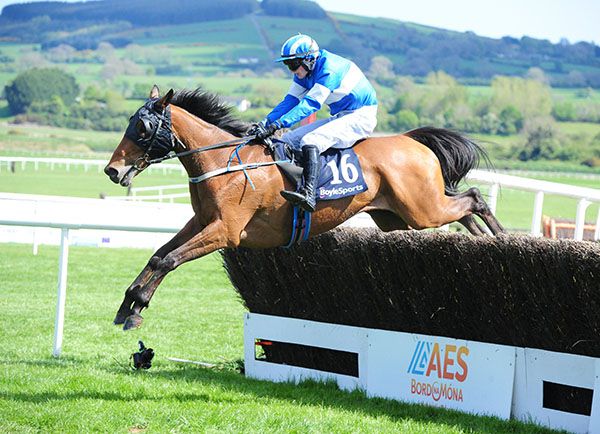 Cloudy Morning powered clear in the closing stages to run out a wide margin winner of the marathon contest for the Boylesports Handicap Chase at Punchestown.

Declan Queally's charge came into the three-mile-seven contest in fine form and made it a hat-trick of wins in the €50,000 contest.

7lb claimer Sean O'Keeffe produced his mount to dispute four from home and he kicked on over the second last to seal the deal.

The 11-year-old galloped on strongly from the back of the last to record an 18-length win at odds of 11/1. Regal Encore proved best of the rest, four-and-a-half lengths ahead of long-time leader Wounded Warrior

“I'm in shock to be honest. I can't believe it,” said Declan Queally junior, assistant and namesake of the trainer.

“For an 11-year-old to climb the handicap so much but he's done it.

“His grand-mother was a full-sister to a National winner and being by Cloudings they seem to stay well so we said we'd take a chance in the race.

“With Sean's 7lb it was such a light weight and obviously helped so much over three-miles-seven.

“I'm just so shocked and thrilled to have a winner up here.

“The handicapper is probably going to have his say now but we don't care. It doesn't matter if he never wins again.

“It's been an unbelievable season and I don't think we've had a horse that hasn't finished in the first three, bar one on the Flat. The horses are rocking and long may it continue. We'll try and keep them healthy if we can.”

O’Keeffe added:- “I had a good winner at Leopardstown last Christmas but this would be my biggest winner. I’m riding out with Jessica Harrington, Liz Doyle and Paul Nolan.

“That’s my first ride for Declan. He was savage and travelled everywhere. He jumped great and was better the further he went. Declan said he would stay every yard of the trip and he was dead right.”