Moskovite wins at her 1st attempt over racecourse fences 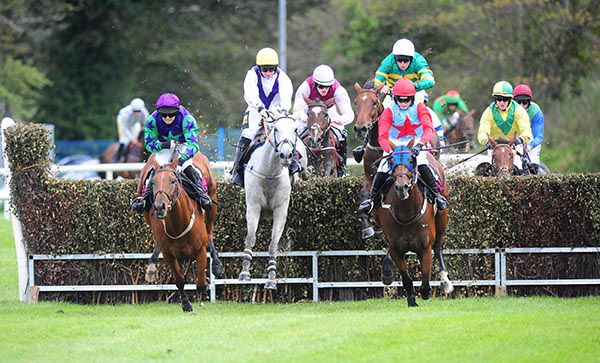 It's all action at the last in the Sligo opener - Moskovite (grey, winner) and Denis Hogan
© Photo Healy Racing

Nine to four favourite from as big as 11/4 on track, Moskovite got it done at her first attempt over racecourse fences in the Irish Stallion Farms EBF Mares Beginners Chase at Sligo.

Put in at odds-on by the off-course firms yesterday, the successful grey was easy-to-back as Le Hachette tumbled from double figures into a returned 11/4.

That John Ryan runner tried to win the two mile one furlong event from the front, but she could never really get her own way.

She finished sixth in the end as only five lengths covered the first five home.

Moskovite won a point-to-point which she later lost (prohibited substance) in January 2018, and that experience certainly done her no harm here.

Twice successful over flights, and in bumper company, she showed a bit of class from the back of the last to account for Ar Eagla Na Heagla by a length and a quarter.

“She’s only back in training six weeks but when I saw the small entry I decided to put her in even though the trip could be too short," said Hogan.

“Hopefully she’ll be a better chaser (than a hurdler). She seemed to enjoy it there. She had very little schooling done so that should bring her on.

“She’s exciting. I was looking forward to her going chasing and she’s done it well there. I’d hope there is a bit more to come.

“She’ll go the same route as her sister, Moyhenna, in those mares’ races.”