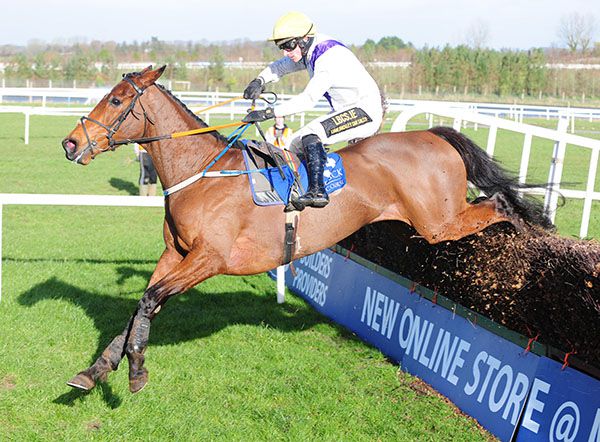 Moyhenna ran her rivals ragged to run out a impressive winner of the Charleville EBF Mares Novice Chase at Limerick.

Denis Hogan's charge had failed to complete on her last two outings but jumped for fun at the head of affairs today in the Grade 2 prize.

Hogan built up a healthy lead turning out of the back straight on the Westerner mare and was looking around for dangers before the home turn.

The 5/1 shot galloped on strongly in the closing stages as she went on to record a comprehensive 25-length success.

"I was never as sick as I was coming home from Thurles the last day and the quick ground floored her the time before in Fairyhouse; she is a national hunt mare and was going a stride quicker and is not for good ground,” said Hogan.

"I took a chance running her the last two days on good ground and thanks be to god she came back sound.

"She wants to jump and looks after herself and she is a proper mare and I'm delighted for the lads.

"I entered her for the Irish National during the week and she was just 125 before today but we'll see. There are more of those mares' novices and there is also the Fowler Chase at Fairyhouse in Easter."