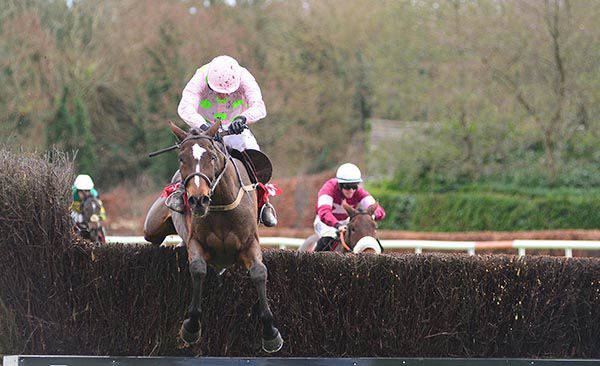 Willie Mullins will rely on last year’s winner Min to provide him with a second victory in the Ladbrokes Dublin Chase at Leopardstown on Saturday.

The champion trainer held a formidable hand in this two-mile contest at the confirmation stage, with Min joined by esteemed stablemate Footpad.

The latter was the undoubted star of the two-mile novice division last season, winning each of his five starts including the Irish Arkle on this corresponding card 12 months ago and the Arkle Trophy at the Cheltenham Festival in March.

His reputation has been significantly dented this term as he fell and was injured at Naas before suffering a shock — albeit narrow — defeat over Christmas, but he was nevertheless rated the biggest threat to Min by the bookmakers.

However, he did not feature among the declarations on Friday morning and Min will almost certainly be odds-on to repeat his victory of 12 months ago after making a successful reappearance in the John Durkan Memorial Punchestown Chase in December.

Patrick Mullins, assistant to his father, said: “Footpad isn’t injured. Willie just felt Min was in better form so decided to go with him.

“Min won this race well last year, so we know he likes the trip and track.

“We’ve been happy with him at home and he should be very hard to beat.”

It was the Nicky Richards-trained veteran Simply Ned who mowed down Footpad in December and the 12-year-old has once again made the trip across the Irish Sea.

That latest triumph was his second at Leopardstown and he has never finished out of the first three in six visits to the Dublin circuit — including a runner-up finish behind Min in this race a year ago.

Richards said: “What I always say is he’ll generally beat more horses than beat him.

“He’s in very good form. He had a little canter at the track on Thursday morning and the lad who looks after him says he’s in at least as good a form as he was there over Christmas.

“There are some top horses in there and it’s a proper Grade One — we’re under no illusions about that.

Simply Ned is one of two British-trained runners along with Harry Whittington’s stable star Saint Calvados.

He already had the measure of Footpad when winning at Naas in November and was last seen finishing third behind Altior and Un De Sceaux in the Tingle Creek at rain-lashed Sandown.

Whittington said: “He’s all set to go. It looks a tough contest, but we’re happy with our horse and with his rating these are the kind of races he needs to run in.

“It’s a left-handed track on better ground, which we now think suits him better.

“He’s nice and fresh after having a break since the Tingle Creek. We’re very happy with him going into the race.

“He had the beating of Footpad at Naas and if he can run a similar race to that — or maybe even improve a bit — he should be there or thereabouts.”

Castlegrace Paddy was fourth behind Simply Ned and Footpad in December and renews rivalry with the former.

Trainer Pat Fahy said: “I’d like to see the ground a lot softer in an ideal world as Davy (Russell) felt he wasn’t letting himself down on the ground over Christmas. He wasn’t really letting fly at his fences and was just being a bit cautious.

“There is some rain around so hopefully the ground will be a little bit easier and we’ll see how we go. I think he’s just more in his comfort zone on softer ground.

“The way he stayed on to be beaten only five and a half lengths would give you hope.”