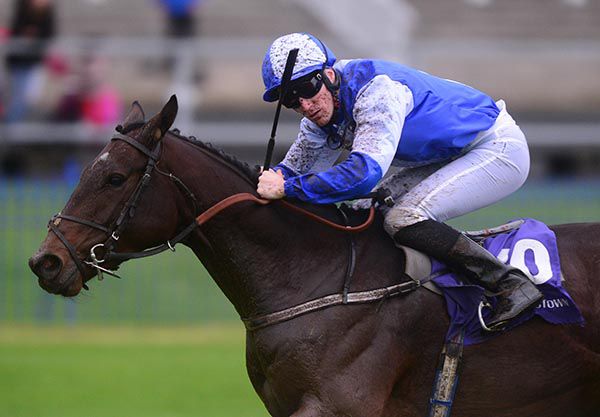 The son of Battle Of Marengo gained his first career win on testing ground at Roscommon last month and followed up on similar terrain today as he beat Future Proof by four and a quarter lengths.

Mullins won the half-hour earlier Group 3 Killavullen Stakes with Stela Star and following his second win stated “he (Takarengo) had 75 and he wasn't getting a decent weight in a proper handicap so today was to try to get him right for next weekend or the weekend after. There is a €50,000 1m4f here next weekend and €10,000 race in Naas in two weeks time.

“I suppose he'll get a nice raise for that, he's probably entitled to, and it will give him a decent weight in either handicap. Whether he goes next weekend or to Naas I don't know.

“Then we'll think about hurdling or he could do anything, he's a good horse.

“He could be an Ebor horse next year, he's only a three-year-old, and he could even go further. He's a good well-bred horse and he's only learning his trade now.

“He was free early doors in maidens but has learned to settle now and race. The future is bright for him, I hope.”