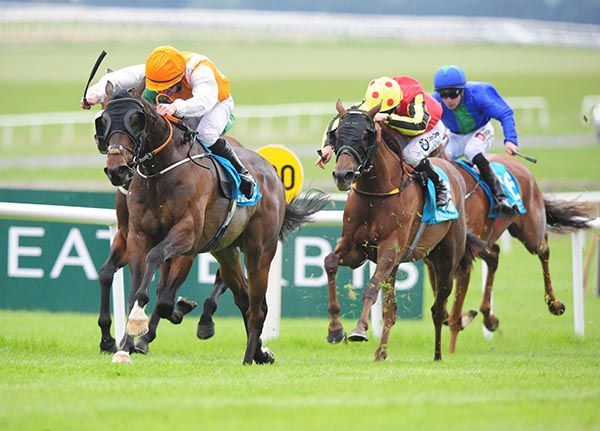 In first-time blinkers Insignia Of Rank took the FBD Hotels & Resorts Handicap at the Curragh for Joe Murphy and Gary Carroll.

The 10/1 shot tracked the leaders and he was fourth at the halfway stage.

He made headway travelling well early in the straight and was ridden to lead over a furlong out.

Keeping on well inside the final furlong Insignia Of Rank defeated Sheisdiesel by two lengths.

“That was the plan and we'll aim for Galway now for the Topaz Mile. It depends on what the handicapper does to him,” said Murphy.

“I think he's versatile, a mile-two on that ground and a mile on softer.

“We had the blinkers on him because when he hits the front he half pulls up. He's a very genuine horse but it just makes him concentrate more.

“I was delighted with the filly (Shekiba) as well in the group race, I know she was seventh of seventh but I think she'll come on a lot from that. The horses are running well.

“It's nice to win on a big day like today and the lads are great that own him.

“Galway is the plan but we'll have a look and see what is there before that.”