Mystique Heights knuckles down for Doyle 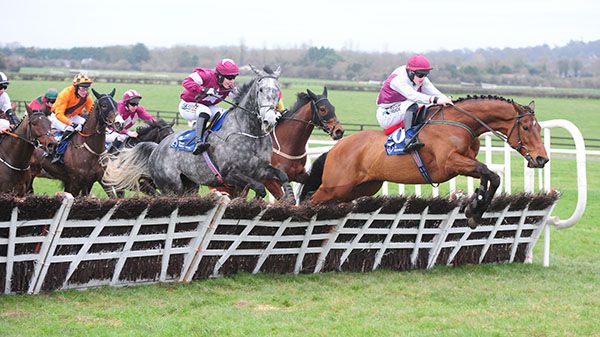 "Mystique Heights beats off all comers" was the cry from racecourse commentator Jerry Hannon as the winner delivered in game fashion in the Adare Manor Opportunity Handicap Hurdle.

He was prominent early for Ricky Doyle who sent him on after the first obstacle.

The pair were there to be shot at by plenty of rivals who jostled for position in behind coming to the second last.

Doyle got into the drive position on Mystique Heights after that hurdle, though, and the pair still held a narrow lead at the last.

Mystique Heights wasn't for passing as he made the best way home by a length from Latoyah Of North (12/1).

The well-backed Eviscerating (9/1 to 13/2) was three parts of a length further back in third with the eye-catching Uno Momento finishing well for fourth at 16/1.

“He ran well in Leopardstown. He’s been knocking on the door on the Flat, and he relishes good ground. He was back down a little bit in class from Leopardstown, and Ricky gave him a very good ride.”

Ricky Doyle added: "Leopardstown was a very good race and he still managed to come out fifth. Dropping back down in grade was a big help to him.

"We set off to get a lead but it was in my hands and we were hacking and they allowed me to be there and I was happy in front. I was hacking the whole way around.

"We sprinted up the hill and got first run on them. He should win a few more if he keeps that attitude up."