Natural Power comes through after lightning storm at Down Royal 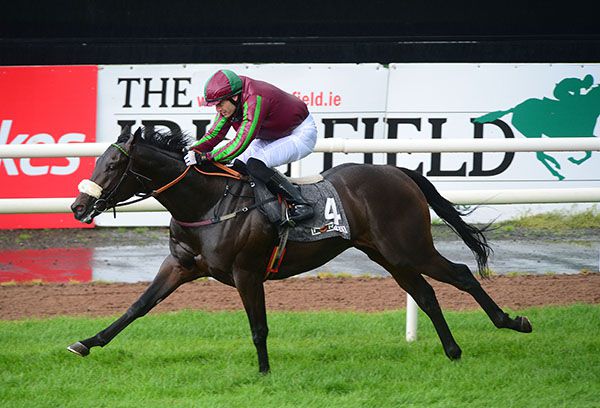 Severe lightning saw the Foran Equine Irish EBF Auction Maiden go off six minutes late but favourite backers were happy in the aftermath as Natural Power got it done under Robbie Colgan at Down Royal.

Gigginstown House Stud bred this Slade Power colt and Dot Love owns and trains the juvenile, third and second on his previous starts.

The form of his Galway second placing has been well franked in the interim and here after prevailing by two and a half lengths and three and three parts of a length from Cliffs Of Freedom and One Cool Choice winning connections were understandably well pleased.

"He's improving with every run slowly, he has been brought along really well," said Colgan.

"With the heavy shower (before the race) it rode good and soft there and I got trapped very wide but I knew he would gallop on at the end.

"He was idling away and it was very soft ground and it took a bit of getting.

"He does (have plenty of talent) and I think he will keep improving away. Every race he is getting better."

Under the provisions of Rule 90, the Stewards allowed Ivy Avenue trained by J. S. Bolger, to run on receipt of the trainer's written assurance that the error identified in the certification of vaccinations would be corrected in accordance with Rule 91 within the timeframe specified.

The Irish Horseracing Regulatory Board Veterinary Officer examined The Truant trained by Mrs John Harrington, at the request of the Stewards and reported the animal to be post race normal.