No instructions given as Doctor completes hat-trick 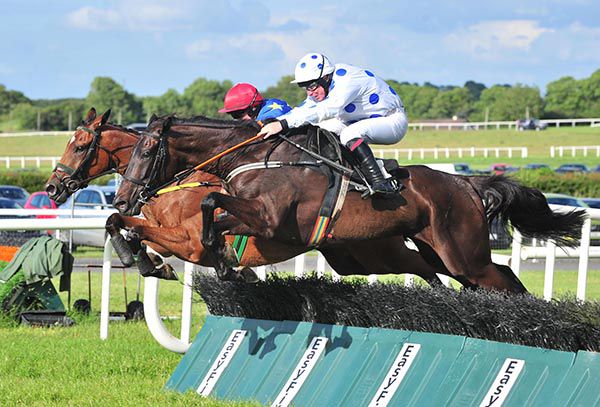 Doctor Duffy completed a hat-trick of wins, as he battled gamely to land the Add Kilbegganraces On Snapchat Novice Hurdle.

Having won a bumper at Cork in October, the Charles Byrnes trained six-year-old followed-up on his debut over flights at Killarney last month.

Stepping up in trip to three miles one for the first time this evening, the son of Craigsteel was sent off the 11/10 favourite under Phillip Enright.

Settled in second off a slow pace set by Dona Katherina, he dropped to third with a circuit to go.

He was switched to the outer and pushed along to challenge before the last and soon became engaged in a good tussle with Jerandme getting on top close home, going on to score by a length.

Jerandme was returned at 7/4 (from 2s) under Sean Flanagan, while the front-running Dona Katherina faded once headed before the last, and was a further eight and half lengths back in third.

Byrnes said afterwards: "It was a messy race and we think he is a fair horse. His bumper form is quite good. I think 2m 4f is his trip and in that race they hacked for half of it.

"He ballooned an early flight but is going the right way and he'll run in a novice hurdle over 2m 4f next."

He then added: "And for the record I gave the jockey no instructions!"