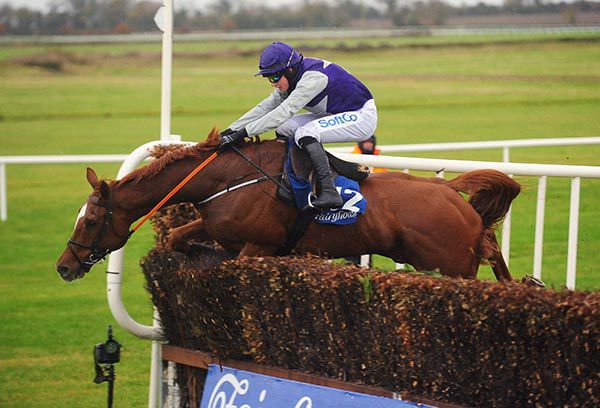 Paul Nolan feels Quamino’s best chance of a run at the Cheltenham Festival could be in the Brown Advisory And Merriebelle Stable Plate.

The six-year-old scored under Bryan Cooper at the Dublin Racing Festival on Sunday over two miles and a furlong, taking his mark up to 138 in Ireland.

With that unlikely to be enough to get him into the Close Brothers Handicap Chase against fellow novices and given last year’s bottom weight in the Grand Annual was 139, the Plate could be his only option.

“We were delighted, especially for the owner as he’s from Dublin so to win in his backyard was great,” said Nolan.

“He’ll be entered in the Plate. He’s gone up to 138 in Ireland, so that means it’s unlikely he’ll get in the novice handicap and it will be touch and go for the Grand Annual.

“We want to go, he’ll be entered in all the handicaps but he could be struggling to get in the others, so the Plate looks the best bet at this stage. The English and Irish handicappers are trying to make it so there isn’t much difference now.

“He’s only six, he’s improving with each run and he galloped to the line well at Leopardstown, hopefully there’s a bit more in him.”