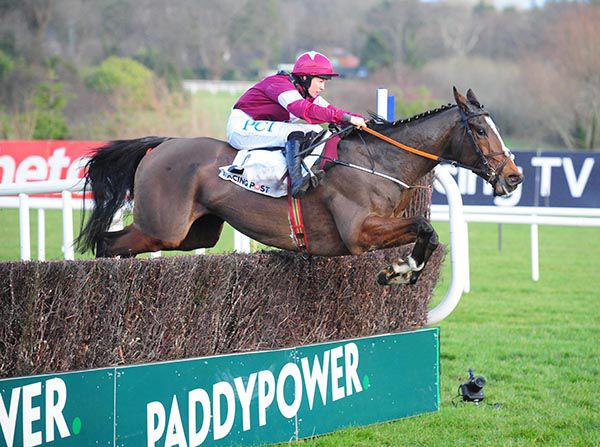 Notebook maintained his unbeaten record over fences with a convincing victory in the Racing Post Novice Chase at Leopardstown.

Having won twice at Punchestown, Notebook had no trouble stepping up to Grade 1 company, in the process taking the scalp of Fakir d'Oudairies and Laurina

Given a confident ride by Rachael Blackmore, Notebook (7-1) travelled well throughout as Djingle set the pace.

Making her move after the third-last fence, Blackmore sent Henry de Bromhead’s six-year-old to the front at two out, from Royal Rendezvous and Fakir D’oudairies.

Those two got close, which resulted in Mark Walsh briefly losing an iron on the latter.

Notebook was gone and went on to score by a length and a half from Fakir D’oudairies, while Laurina (burst a blood vessel) made a number of mistakes and was well beaten when pulled up before the last.

This completed a big-race double for Blackmore and De Bromhead following the success of Aspire Tower in the Grade 2 Knight Frank Juvenile Hurdle.

De Bromhead said, “It’s what we hoped he might do. He jumped brilliant - he gallops and just loves fences.

“I think it was the first one down the back he took off outside the wings and my heart was in my mouth but he’s quick when he’s in close as well.

“They went some gallop and that really suited him. He loves to gallop at speed.

“He can get a bit wound up. I think those two milers need to be half cracked to do what they do. They need that bit of madness to jump.

“The Irish Arkle is probably the obvious next one from here but we’ll see what they want to do.”

Notebook is favourite, or joint favourite with Fakir d’Oudairies, for the Arkle Trophy at Cheltenham with BoyleSports cutting him into 5/1 (from 16/1).